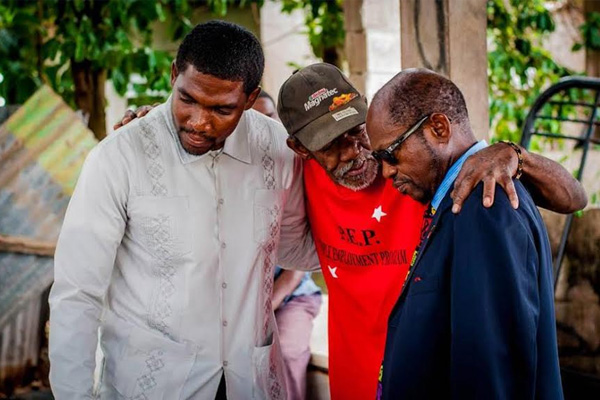 Basseterre, St. Kitts (SKNIS): The Out and About with the PM series has been hailed by Prime Minister the Right Honourable Dr. Denzil Douglas as a welcomed initiative that provides another avenue for residents of St. Kitts and Nevis to shape the policies and programmes of the Federal Government.

The initiative features the Prime Minister, select members of Cabinet as well as key ministry and community personnel visiting various businesses and interacting with management and employees to help assess the impact of government policies. To date, visits have been made to Ogees, St. Peters, Imperial Bay Beach and Golf Residences development at Half Moon Bay, manufacturing firms Kajola Kristada and Lutron Electronics, the St. Kitts Marriott Resort, the Royal St. Kitts Hotel and the taxi stand at Frigate Bay. An engagement also took place in Nevis with trainees, facilitators and employers under the People Employment Programme (PEP).

“People are concerned about labour issues,” said Prime Minister Douglas, while reflecting on the feedback garnered from the tours. These include social security benefits, the minimum wage and the calculation of the long service gratuity payments being paid to qualifying private sector employees who worked for 10 years or more for the same company. Discussions also touched on infrastructural improvements in areas where landowners are preparing to construct homes.

“We are looking at this and we are now doing something about this,” explained the Prime Minister. “We’ve had White House Gardens, Stapleton Gardens. We are now in Newton Ground. We have been in Mansion. Roads and the necessary infrastructural support for developing our communities are now being put in.”

Reviews will also be made into the way some taxi drivers are assigned jobs. The dispatch procedure, being implemented by the two local taxi associations, has generated some controversy in the past. The Prime Minister reported that he brought up the issue at this week’s Cabinet and the Minister of Tourism Honouable Richard Skerritt assured that he will have an official look into the matter again to ensure the system is equitable.

On the subject of wages paid to workers in the manufacturing industry, Prime Minister Douglas advocated for tripartite discussions between the Government, Trade Union and employers to explore a number of proposed measures.

“All in all it has been a very important period of visiting,” the Prime Minister emphasized. The Out and About visits will continue with engagements with the security forces and other private sector entities in the near future. Residents also regularly share their views on matters of national interest with Cabinet members through the Ask the PM radio show, Face to Face Town Hall Meetings and in one on one discussions.