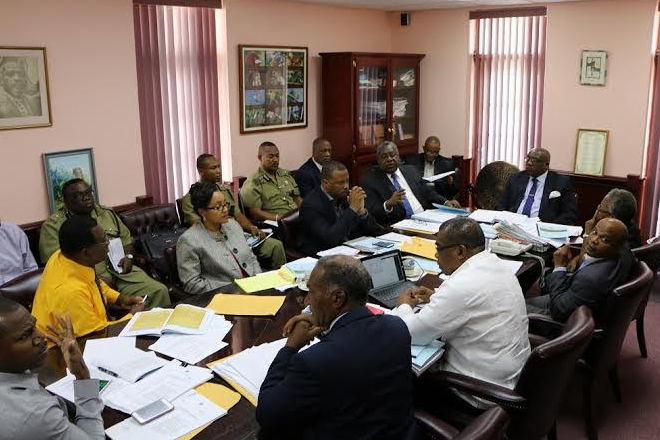 (ZIZ News) — The Police High Command met with the Federal Cabinet on Wednesday to discuss the Force’s Strategic Plan for 2016-2019.

The Four Year Strategic Plan, which is made up of the RSCNPF Improved Service Delivery Plan 2015-2016 and 3 Year Strategic Plan 2016-2019, comes on the heels of the implementation of the Six-Point Action Plan which was developed by the High Command in July 2015.

Acting Commissioner of Police, Stafford Liburd, said moving forward over the next four years the Police Force “will build upon the successes it has seen over the previous strategic plans.”

He said that with the Six Point Action Plan, the Police Force has made “made significant progress towards meeting its targets, and in some cases, meeting or exceeding the target prior to the end of the plan.”

Chairing the Cabinet, Prime Minister and Minister of National Security, Dr. The Hon. Timothy Harris said that the Cabinet accepted in principle the Strategic Plan 2016-2019. He said that the structure of the Police High Command has been a major topic for national debate.

Dr. Harris pledged that the Ministry of National Security will continue to provide the police with the resources needed and implement strategies to ensure that St. Kitts and Nevis continues to be a safe place to live, work, visit and do business.