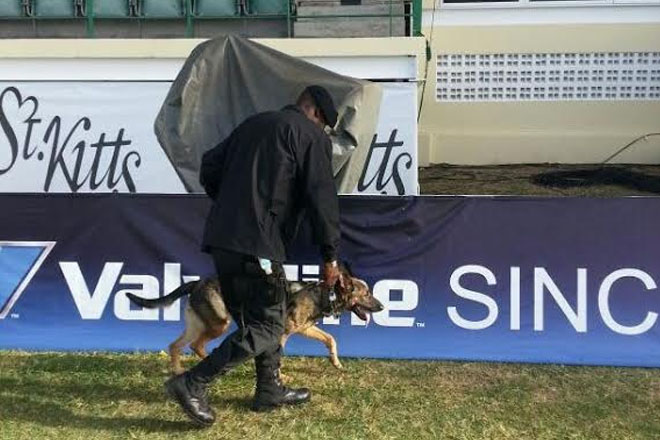 (RSCNPF): This week, St. Kitts and Nevis hosted the Tri-Series cricket championship, and for an event such as this, venue and spectator security are top priorities. Leading the charge to ensure this security is the Royal St. Christopher and Nevis Police Force.

According to Superintendent Cromwell Henry, “an event such as this, the CPL Tournament, or any of the regional meetings held in St. Kitts and Nevis, requires the highest levels of security.” To ensure this he said takes a collaborative effort across the Police Service, “we have several departments coming together as a team to ensure the goals are met, most persons only see the actions of the traffic department with parking restrictions and road closures, however the team is much larger and has members from several departments and units contributing to the success.”

One such unit highlighted by Superintendent Henry is the K-9 unit. He said, “the K-9 unit plays a vital role, and it is often unseen. Our explosive detection teams are the first at work on game or event days to ensure the venue, be it Warner Park or elsewhere is free of explosives, guns and ammunition.” He added, “in addition, other members of the unit may be seen roaming in search of illegal drugs during an event.”

“Our recent upgrades in the K-9 unit are already benefiting and will continue to benefit St. Kitts and Nevis,……. it shows we are have the assets required to ensure event safety”, said Supt. Henry.

The K-9 capacity and the ability of a Police Force to meet international security requirements are contributing factors to St. Kitts and Nevis being selected as a venue for international events, knowing that the security objectives can be met.

The team of six (6) canines were sourced by Bramshill Policing Advisers (BPA) and supplied and trained by “Dog Detectives” a United Kingdom based company. The K-9 unit and their handlers participated in an eight week vigorous training program here in the Federation.

Other units that play a critical role in event security are the Special Services Unit (SSU), the Immigration Department and other specialized departments.