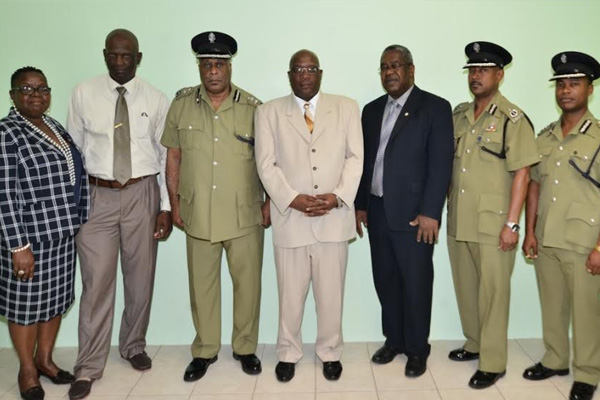 Basseterre, St. Kitts (SKNIS): Members of the Royal St. Christopher and Nevis Police Force have welcomed the new leadership of the Ministry of National Security being headed by Prime Minister Dr. the Honourable Timothy Harris.

Deputy Commissioner of Police Stafford Liburd, other members of the Police High Command as well as the rank and file, met with the Prime Minister and Attorney General, the Honourable Vincent Byron, during a meeting on Wednesday (March 04).

DCP Liburd described the day as “important” and added “it is always a pleasure when a Prime Minister graces us with his presence. However, we must well be aware that this is the first occasion for Dr. the Honourable Timothy Harris to join us.” He added that he was looking forward to future engagements.

“You have taken the Ministry of National Security at a time when it is the most challenging ministry,” he stated, referring to the current threat posed by criminal elements. “I think that is a display of the strength of character that is needed in a leader and for that I want to openly congratulate you.”

ACP Henderson’s statement was punctuated by applause from the officers who were assembled at the NEMA conference room. Other officers offered congratulations to the new Prime Minister and Attorney General and expressed their commitment to ensuring the safety and security of the population. They also welcomed the words of support and encouragement as well as the assistance pledged by the ministers to upgrade the skills of the officers and the equipment assigned to law enforcement