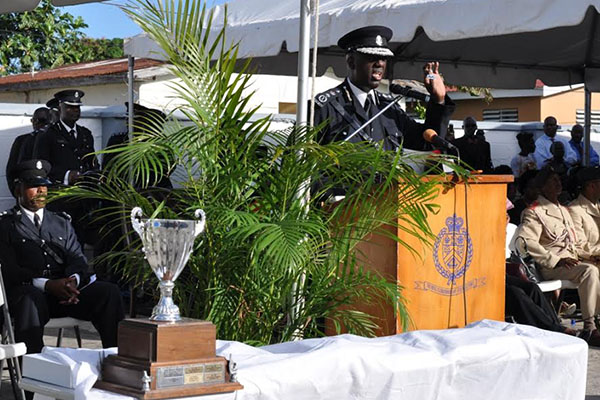 Basseterre, St. Kitts, (SKNIS) — The weight of the Force Number assigned to each member of the Royal St. Christopher and Nevis Police Force was stressed to the 23 men and 13 women who passed out at the 38th Graduation Ceremony on Thursday (February 27).

Commissioner of Police Celvin G. Walwyn recited a piece adapted from his days in law enforcement in the United States in his official address.

“Each of you gradaunds has come here today to claim your force number of honour. You have overcome many obstacles and endured many trials in order to wear this small symbol,” he stressed. “ … People look up to the force number as a symbol of protection. Just as a small child clings to its parents for protection, the community in its time of need looks to you.”

Commissioner Walwyn highlighted the enormous responsibility that comes with the job of a police officer and warned the recruits to be true to the oaths they have taken.

“This Force Number helps people whether they are rich or poor or somewhere in between and it does not care which religion you are or what race or gender you choose. It only cares that the person holding it holds it in the honour that it deserves.”

The newest members to the law enforcement agency were welcomed to the local fraternity and told that they now have brothers and sisters around the world.

“It does not matter that you are a police officer here in St. Kitts and Nevis, anywhere that you go in the world, once the word police officer is mentioned amongst your brothers you are accepted,” the police chief explained. “With this Force Number, you carry behind you the people that have lived, breathed and died to protect what it stands for. It stands for helping your fellow man and making a difference in your community.”

Commissioner Walwyn concluded his address by encouraging the gradaunds to carry the number with “honour, respect and dignity.”