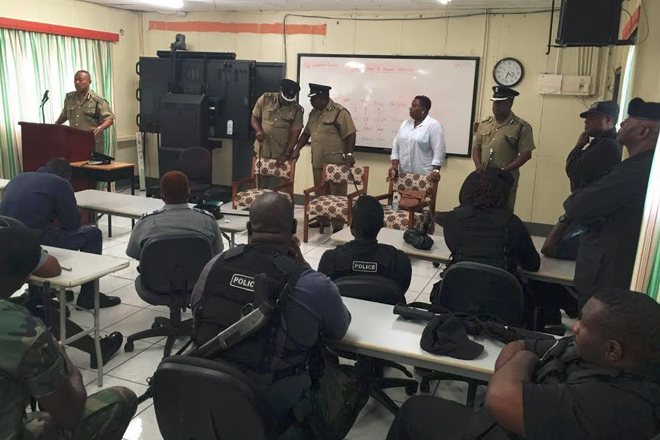 “February was a month free of homicides, as a matter of fact it is approximately eighteen (18) months since we have not had a month without a homicide. This I believe was in large measure due to a more strategic approach in our operations,” said the Commissioner. He added, “January was a disturbing month for the federation and our team at the Royal St. Christopher and Nevis Police Force implemented measures in partnership with the St. Kitts and Nevis Defence Force and Her Majesty’s Customs and Excise Department, to address the concern and we embarked on an operation to increase law enforcement presence in our communities, in particular those areas we identified as ‘hot spots’.”

“Increased foot patrols, targeted stop and searches, strategic Vehicle Check Points (VCPs) and mobile police presence throughout our islands was the order for February. Today we are encouraged by the results. That increased presence in part have kept those bent on engaging in violent criminal activity at bay,” said Commissioner Queeley.

The Commissioner said, “today’s good news is also a testament to the dedication and commitment of the men and women who serve in the Police Service. During the last few weeks, they have sacrificed much and so have their families and other special persons in their lives. Today I salute them for a job well done, and I say thank you and encourage continued support from the families.” Commissioner Queeley further said, “it was echoed to many during our presence in the communities, that we are on the right path and keep up the pressure.”

Commissioner Queeley said, “Ensuring citizen safety is paramount for the Police Service.. we will do our part. Citizens have a part to play as well, and to ensure continued success in reducing crime and the fear of crime in our communities, citizens and residents I implore you to get involved.”

He stressed, “you must get involved in the homes, in the schools, on your streets, in your villages. We have to become engaged and when we do, months like these will become more frequent.” He added, “don’t be afraid to share information you may have regarding a crime or criminal activity. To provide information on any crime or known criminal activity, citizens are encouraged to call any Police Station or Crime Stoppers the anonymous hotline at 1-800-8477(TIPS). Together we will make a difference.”