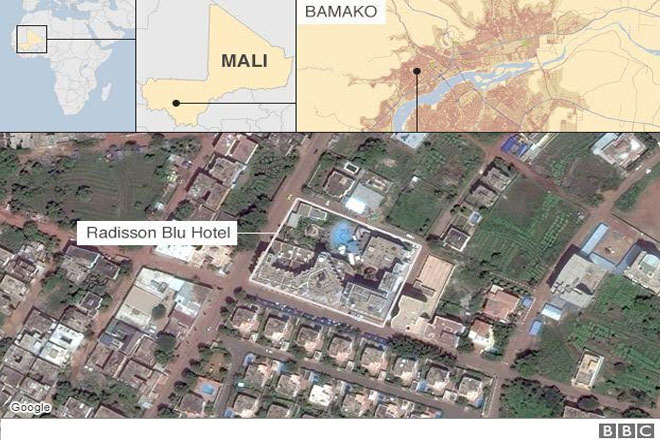 (BBC) Malian police have appealed for help to identify the two gunmen who carried out Friday’s attack on a hotel in the capital, Bamako, in which 22 people were killed.

Pictures of their bodies have been shown on state TV and police have asked for the public’s help to identify them.

Three different Islamist groups have said they carried out the attack.

Investigators have yet to determine the number and nationality of the gunmen.

However, Islamist group al-Murabitoun, which first claimed responsibility for the attack, has issued a new audio recording identifying the two gunmen, reports say.

They were named as Abdel Hakim al-Ansari and Moadh al-Ansari.

One security source in Mali earlier told the BBC that officials believed that the two dead gunmen had been speaking English during the attack.

The police found a suitcase with grenades in the hotel lobby and were following up “several leads” linked to “objects” left by the gunmen, a Malian police source has told the AFP news agency.

Ahead of the three days of national mourning declared by Mali, the chairman of the West African regional bloc Ecowas, Senegal’s President Macky Sall, visited Bamako to show support.

He said on Sunday: “Mali will never be alone in this fight, we are all committed because we are all involved.”

Senegal, Mauritania and Guinea are also observing the mourning, which started on Monday.