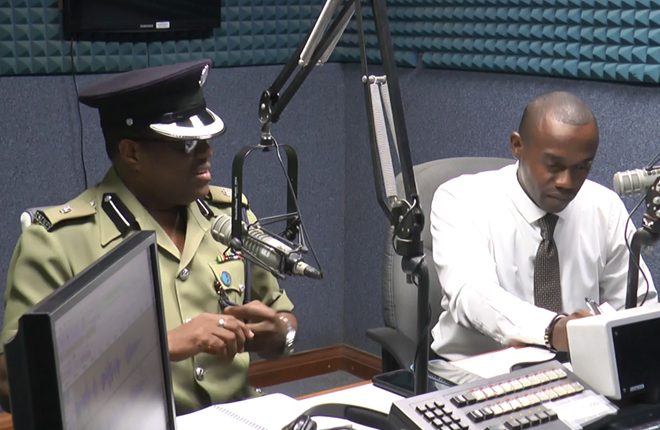 Policing with You – Community Engagement in District B

The officers of the Royal St. Christopher and Nevis Police Force have been spearheading community engagements across the island and Superintendent Travis Rogers visited the ZIZ’s studios on Thursday to talk about the community engagement efforts within Division B on “Policing with You” with host Inspector James Francis.

Superintendent Travis Rogers is the Division “B” Commander and he explains the areas in which Division B cover.

“We span from the east in Lodge Ghaut, right around going through Tabernacle to Ross University in the west.”

Superintendent Rogers said the police have so far been in areas such as Newton Ground, Sandy Point, and Halfway Tree

He said the police have not only engaged with persons from the community but also children in schools.

The Division B Commander also said that the community engagement initiative uses a more structured method based on what he describes as the 4 E’s.

“We have the 4 “E”s , we have engagement where we engage the community, we have enforcement, we have education and we have engineering. You education is basically where we go and say look, if you have a door to properly secure it we need you to put on some power bolts, look you have one cylindrical lock that is not good enough because the would be breaker can easily penetrate your security. We come down now to engineering where we go and we map the area, let’s say we’re in Halfway Tree and we engage 50 persons on a particular day, we take their address and telephone number so we know exactly where persons live in that area.”

“Policing with You” airs every Thursday morning from 9:15am to 9:45am on ZIZ radio during the “Morning Show”.