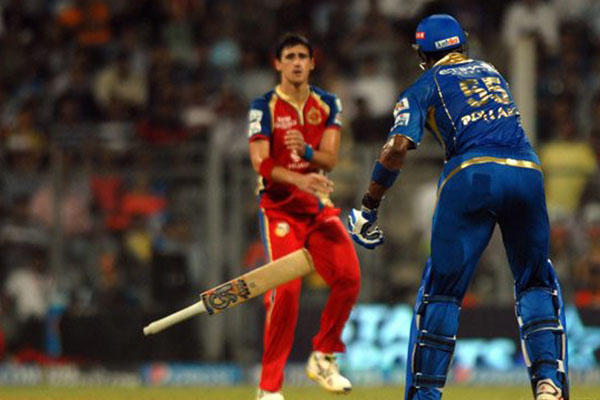 Kieron Pollard and Mitchell Starc have been fined for their heated altercation during the match between Mumbai Indians and Royal Challengers Bangalore at the Wankhede Stadium on May 6. Pollard lost 75% of his match fee while Starc was penalized 50% by match referee Andy Pycroft.

Both players admitted to level 2 offences under the IPL’s code of conduct, under which the penalties for a first offence range from a fine of between 50-100% of match fee and/or a suspension of up to two matches.

Pollard was charged under article 2.2.7 of the code, which deals with, “throwing a ball (or any other item of cricket equipment such as a water bottle) at or near a player, team official, umpire, match referee or any other third person in an inappropriate and/or dangerous manner during a match.”

Starc was charged under article 2.2.11, which deals with, “where the facts of the alleged incident are not adequately or clearly covered by any of the above offences, conduct that either: (a) is contrary to the spirit of the game; or (b) brings the game into disrepute.”

The incident occurred in the 17th over of Mumbai’s innings. Starc bowled a bouncer at Pollard, who was beaten as he attempted a hook. Starc went up to the batsman and spoke a few words and Pollard’s reaction was to wave him off. As Starc ran in to bowl the next ball, Pollard pulled out of the delivery by backing away outside leg stump just as the bowler was approaching his jump. Starc did not abort the delivery, though; instead he followed the batsman and bowled the ball in anger close to Pollard’s legs. Pollard responded by swinging his bat hard – appearing to threaten to throw it at the bowler – and it slipped out of his hand and fell on the leg side. Both players were visibly angry and continued to exchange words.