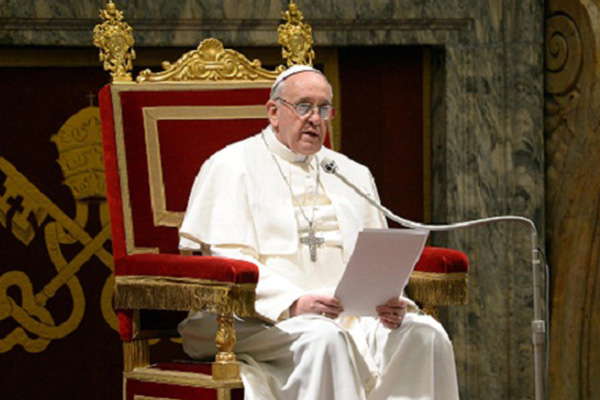 Pope to visit Philadelphia next year for conference

It would be the popular pontiff’s first visit to the United States as Pope.

The news service, the official publication of the U.S. Conference of Catholic Bishops, said Chaput made the announcement Thursday before giving his homily during the opening Mass of the Tekakwitha Conference in Fargo, North Dakota.

“Pope Francis has told me that he is coming,” said the archbishop as he invited his fellow Native Americans to the celebration being held in Philadelphia on September 22-27, 2015.

Francis has received invitations to visit other places in the United States as well, which he is considering, Vatican spokesman the Rev. Federico Lombardi told Catholic News Service. Those invitations include New York, the United Nations and Washington.

In a statement, the Archdiocese of Philadelphia said official confirmation from the Vatican for the trip will likely be given about six months before the World Meeting of Families.

“Archbishop Chaput has frequently shared his confidence in Pope Francis’ attendance at the World Meeting and his personal conversations with the Holy Father are the foundation for that confidence,” the archdiocese said.

“While Archbishop Chaput’s comments do not serve as official confirmation, they do serve to bolster our sincere hope that Philadelphia will welcome Pope Francis next September,” the archdiocese added.

The Vatican, which does not typically confirm papal trips until several months before their scheduled date, said the Pope has “indicated his willingness” to visit Philadelphia but has not made “concrete plans” yet.

“Keep in mind that we are still one year away from the Philadelphia meeting,” Lombardi said in a statement on Friday.

A visit by Francis, the first Pope from Latin America, would resonate with the nation’s growing Latin American population.

“The Hispanic population is growing in the United States, and with the vast majority being Catholic, having the first Pope from Latin America come to visit will be very exciting,” said Bishop Thomas Paprocki of Springfield, Illinois.

Roberto Suro, a professor of public policy at the University of Southern California, said a U.S. visit by the Argentinian Pope would be symbolically powerful for Latinos — many of whom have slipped away from the Catholic Church for evangelical sects.

“Latino Catholics have probably seen themselves less reflected in the hierarchy than their numbers might mirror,” Suro told CNN.

“There are more Latino bishops now than a few years ago, but the American hierarchy still reflects the old Catholic Church dominated by the Irish and, to a certain extent, Italians and other people of European origins,” he said. “Having a Latin American pope who is going to be speaking native Spanish to Latinos in the United States will be the first time they see themselves reflected so powerfully in the church hierarchy.”

The U.N. General Assembly generally meets in September, leading to speculation that Francis might combine the Philadelphia trip with a stop in New York to address the United Nations.