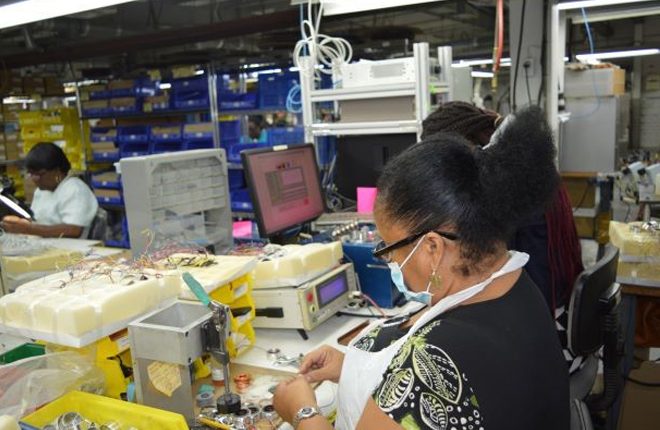 Positive outlook for the manufacturing sector in St. Kitts and Nevis

On Feb 13, 2019
BASSETERRE, St. Kitts, February 12, 2019 (Press Unit in the Office of the Prime Minister) – While conducting visits to the different manufacturing plants on St. Kitts on Monday (February 11), members of the Team Unity Cabinet were updated on the plans and projections of the various factories, which point towards a projected growth in the manufacturing sector in 2019.
The visits to Lutron Liamuiga, Kajola Kristada Ltd, Jaro Electronics, Carib Brewery (St. Kitts & Nevis) Ltd in Basseterre, and API Harowe St. Kitts Ltd in Sandy Point formed part of the Team Unity administration’s fourth anniversary calendar of activities.
Plant Manager for API Harowe St. Kitts Ltd., Mr. Carol Evelyn, stated that in his opinion, the manufacturing sector in St. Kitts “has a very strong future.”
“We have a very good workforce; we continue to ship quality parts out of St. Kitts and that’s extremely good for us. We have people who are ready and willing to work long hours because some of the times we have spike orders and in order to meet those spike orders we have to work the extra time in overtime to meet those orders and the associates are supportive on that end,” said Mr. Evelyn.
A similar view was expressed by the General Manager of Kajola Kristada Ltd., Mr. Jose Rosa, who added that the manufacturing sector is critical to the diversification of the country’s economy, hence it is important that it remains highly competitive.
Speaking specifically of Kajola Kristada, Mr. Rosa noted that his company, which employs a total of 109 workers, is expected to install a new automated machinery and introduce a new product in 2019 that are expected to significantly increase the organization’s revenue in 2019. The company is also expected to provide additional employment for some 10-20 persons this year, with a possible 35 more when it introduces its new equipment and product.
At API Harowe, Mr. Evelyn revealed that 2018 “was really good for us, really good as business was up like 25 percent, and we’re looking forward to another good year.”
API Harowe St. Kitts Ltd, which has been in operation in St. Kitts for 44 years, currently employs approximately 225 workers.
Senior Minister and Minister of Labour, the Honourable Vance Amory, said over the last four years the Team Unity administration has created an environment that promotes growth in the manufacturing sector.
Minister Amory stated, “We want to make sure that workers are being treated fairly and that they get their just wages, and we also want the employers to get their just and fair days’ work. We try as far as possible to encourage employers to find ways of compensating their workers when they do well and we ask the workers to perform well at all times.”
Joining Senior Minister Amory on the tour were Prime Minister Dr. the Honourable Timothy Harris; Deputy Prime Minister, Honourable Shawn Richards; Honourable Lindsay Grant; Honourable Eugene Hamilton; Attorney General, Senator the Honourable Vincent Byron; Senator the Honourable Wendy Phipps; Deputy Speaker, Senator Akilah Byron-Nisbett, and Cabinet Secretary, Mrs. Josephine Huggins.
Also present were the Permanent Secretary in Ministry of Labour, Ron Dublin-Collins, Labour Commissioner Shernel James and Assistant Labour Commissioner Deon Webbe.
Continue Reading
Share
You might also like
National