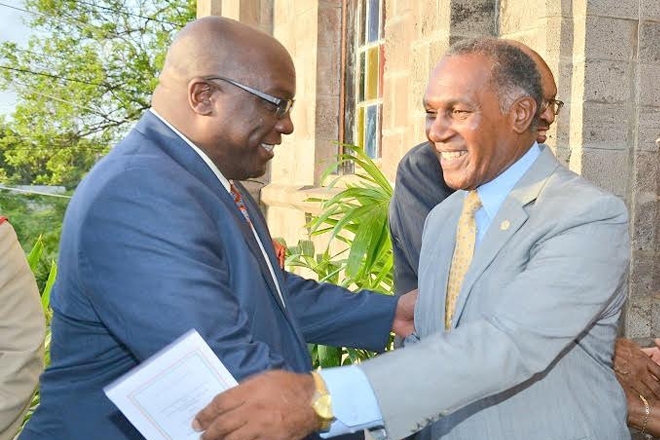 (SKNIS): Premier of Nevis, and Senior Minister, Minister of Nevis Affairs, Labour, Social Security and Ecclesiastical Affairs in the Federal Cabinet, the Honourable Vance Amory, has acclaimed Prime Minister Dr. the Honourable Timothy Harris as a strong and competent leader who espouses collegiality.

At the most recent “Discussions for Prosperity” Town Hall Meeting held at the Newtown Community Centre, Premier Amory said that Prime Minister Harris has led the 18 month old Government of National Unity “through strong leadership”. Premier Amory, the most senior and experienced politician in the Cabinet, has rubbished rumours of a Cabinet divided.

“I have no qualms about saying that Dr. Harris is a strong leader. He knows his stuff. He is eminently qualified and capable to perform in his role,” said Premier Amory, while publicly declaring that the Honourable Mark Brantley, Minister of Foreign Affairs and Aviation, is also a confident supporter of Dr. Harris.

“I personally, and I know my colleague, the Honourable Mark Brantley, who is not here this evening, that we feel confident supporting Dr. the Honourable Timothy Harris as leader,” he said.

Premier Amory said that the last administration was fraught with division and a lack of transparency but that that era of politics is fast becoming something of the past under the new Team Unity dispensation.

Both Premier Amory and Minister Brantley are leader and deputy leader respectively of the Concerned Citizens Movement in Nevis.