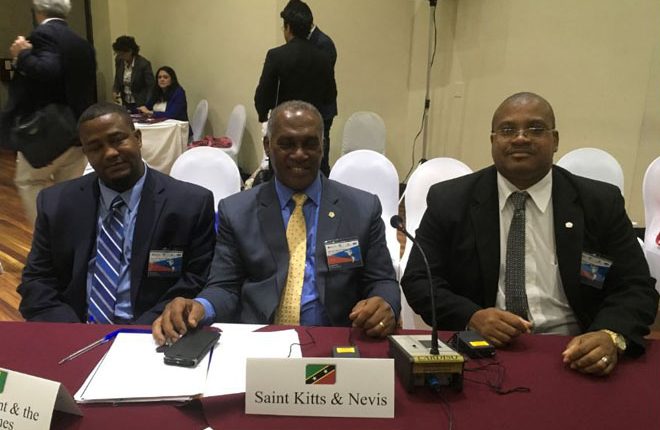 Senior Minister and Premier of Nevis, the Hon Vance Amory, Minister of Labour for the federal government, is leading a delegation of three in participating in a forum on Labour Migration, held in San Jose, Costa Rica. The meetings are part of the activities of the Inter-American Conference of Ministers of Labour (IACML) of the OAS, which in its XIX reunion held in Cancun, Mexico in December 2015, had as one of its priority themes labour migration and the need to advance on the protection of rights of migrant workers.

The general objective of the forum is to analyze and exchange experiences (policies and programs), as well as identify lessons learned and recommendations, in order to strengthen the work of the Ministries of Labour on labor migration. The event focuses on the analysis and exchange of policies and programs undertaken by Ministries of Labour in the following two areas:
– The development of labour market information systems and the provision of relevant information to guide comprehensive migration policy
– The protection of labour rights of migrant workers, including the role of labour inspection, as well as efforts to raise awareness and disseminate information.

The country’s delegation includes Mr Ron Dublin-Collins-Permanent Secretary in the Ministry of Labour, Social Security and Ecclesiastical Affairs and Mr Gary Liburd- Chief Labour Officer of the Department or Labour in Nevis.