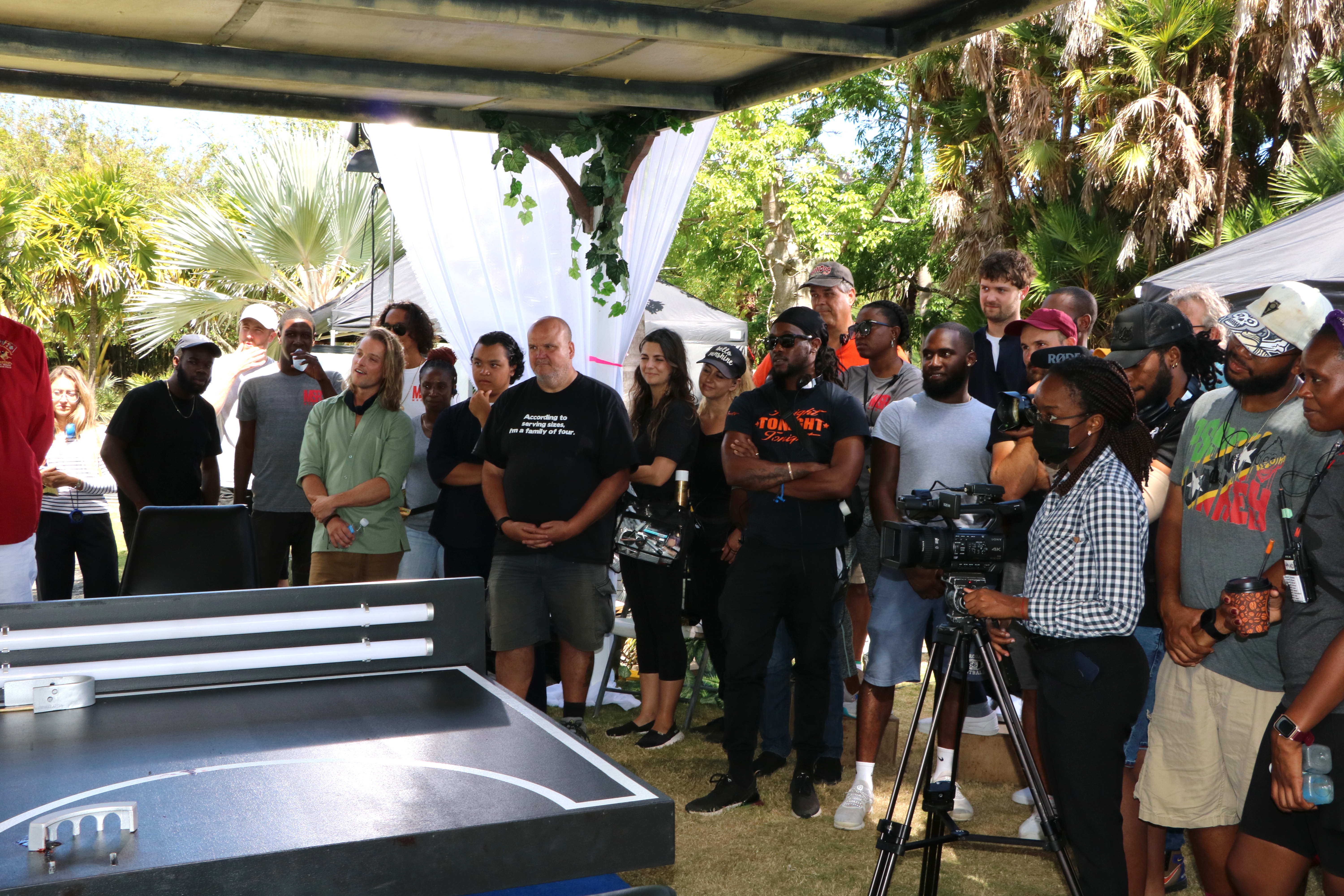 Charlestown, Nevis, March 30, 2022 (NIA) — Premier Hon. Mark Brantley, Minister of Human Resources in the Nevis Island Administration (NIA) is commending the Nevisians and Kittitians learning a new trade as part of the MSR Media film crew and playing a vital role in the production of movies on the island of Nevis.

“I think that we have what it takes to become a player in the movie business in the region and I really commend all of you and I think that all of you should treat this as a university, as a training ground. It’s an opportunity to learn all that you can about film and film production and all that goes into it,” said Premier Brantley during a recent visit to the set of MSR Media’s latest production on Nevis, “Us or Them”, which was being filmed at the Botanical Gardens. Mr. Brantley is also the Minister in the Nevis Island Administration (NIA) responsible for the Film Industry.

Mr. Philippe Martinez, a producer with MSR Media, also noted with pride that many of his crew are now persons from Nevis and St. Kitts.

“What makes me very happy is when I come on set I see so many Nevisians and people from St. Kitts as well, that work in learning a new industry and it’s because we had that vision fourteen months ago. So when I see Doval, Tishan, Terez, Mandela, Frank- all those people that are learning a job I’m very proud of that because that’s what’s called creating an industry. So thank you to the crew, thank you for your hard work,” he said.

Local artist and designer Mr. Vaughn Anslyn started with MSR Media in a small acting role but quickly got engaged with set design, and has since been promoted to Production Designer. He spoke with the Department of Information about his journey into filmmaking.

“I found the filmmaking industry quite intriguing and on top of that the possibility of having your work displayed on the big screen worldwide, I had to jump at that opportunity. I started off as an assistant to a designer that came from the UK and I assisted with getting props and setting scenes and backdrops. After the first two films, the director realized my contribution was on par with the person that they were bringing in because I had extensive experience with art, décor, and lighting, and I had more resources on the island to get what was needed in a more timely manner.”

For the filming of the latest MSR Media movie, Mr. Anslyn not only designed the set where most of the thriller was filmed, but he also built critical pieces of props and mechanisms.

He said that while he enjoys set designing for movies being filmed in his homeland, he would welcome the opportunity to put his expertise to work on a larger scale, even overseas.

“I’d love to get the opportunity to show on the world stage what is capable from individuals from a very small, relatively unknown country, that there exists talent and expertise. Everywhere that I’ve gone to showcase my work I’ve always mentioned boldly and confidently that I am from Nevis,” the artist stated.

MSR Media and the Nevis government entered into a three-year multi-film deal in 2021, following the successful completion of the initial two-movie deal signed in January 2021. The company wrapped pre-production of its fifth movie filmed on the island on Monday, March 28, and is in the process of developing a sixth.