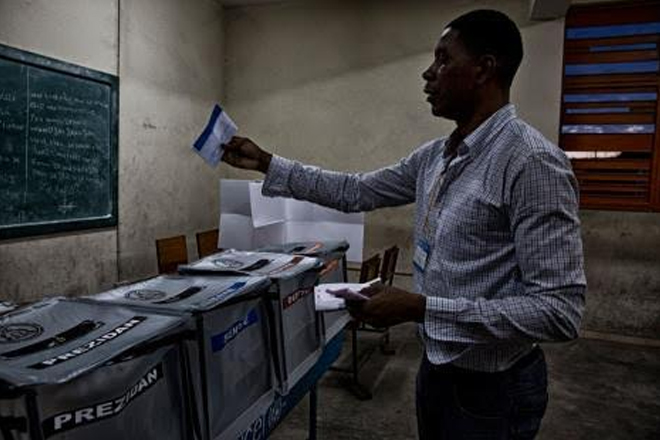 (Caribbean News Now) Haiti – Following a working meeting on Tuesday with President Michel Martelly, Haiti’s Provisional Electoral Council (CEP) has confirmed in a letter signed by its president, Pierre-Louis Opont, “that it is able to guarantee the organization of the second round of presidential and that of the partial legislative and local elections on Sunday, January 24, 2016.”

Twenty-four hours earlier, Opont had informed Martelly that it was impossible to organize the elections for January 17 – the final date, he said, voting could be staged to guarantee the handover of power from one elected president to another in time to meet the constitutionally mandated February 7 deadline.

The CEP has now agreed to respect both constitutional dates, namely, January 11, 2016, for the return of Parliament and February 7 for the inauguration of the elected president.

Meanwhile, for the second time in two weeks, United Nations Secretary-General Ban Ki-moon on Tuesday again voiced concern over the ongoing electoral process in Haiti, urging the authorities and all political actors to resolve outstanding issues as soon as possible.

Jovenel Moise from the governing party and former government executive Jude Celestin, the two top vote getters in the first round of presidential elections on 25 October, were set to face each other in a run-off on 27 December but that was postponed until further notice.

“The secretary-general recalls that Parliament has not functioned since January 2015,” a statement issued by Ban’s spokesperson said on Tuesday. “He underlines the importance of inaugurating the new legislature within the constitutional time frame to ensure the renewal of democratic institutions and consolidate political stability in Haiti.”

He called for the electoral process to be “concluded as soon as possible in a transparent, inclusive and credible manner.”

Ban’s special representative in Haiti, Sandra Honoré, and the so-called “Core Group” – Brazil, Canada, France, Spain, the United States, the European Union as well as the Organization of American States – on Monday called on state institutions and political actors to ensure a peaceful transfer of power to a newly elected president by the constitutionally mandated date of 7 February.

In his earlier statement, Ban took note of efforts by all stakeholders, including the establishment of an electoral evaluation commission to address the concerns of opposition parties and ensure the successful and timely conclusion of the presidential elections and stressed “the responsibility of all political actors to discourage violence and encourage a spirit of unity throughout the country.”

He reaffirmed the commitment of the UN Stabilization Mission in Haiti (MINUSTAH) and the entire UN system to continue supporting the Haitian people in the fulfilment of their democratic aspirations.

The mission, set up in 2004, has more than 4,500 troops and police deployed in Haiti with a mandate that has evolved over the years from supporting a transitional government to embracing earthquake recovery and facilitating the political process.