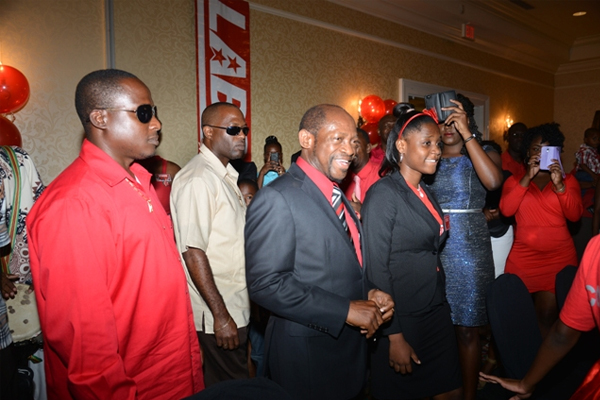 He told hundreds of cheering supporters attending the 82nd Annual Conference of his governing St. Kitts-Nevis Labour Party that the Federation’s successes in several areas warrant the return of the Party for a fifth straight term in office.

“With the help of a merciful God, we have protected this little country and its people in a way that is nothing short of miraculous,” said Dr. Douglas who noted that one of the most important strengths in nature is the ability to adapt and the organism that can adapt most quickly to dramatically changing circumstances is the organism that will survive.

“And to be a champion one needs heart. One needs skill. One needs vision. One needs determination. One needs the strength of character and spirit that makes defeat – in the pursuit of a good and just cause – utterly and absolutely unacceptable,” adding that the aforementioned sums up the St. Kitts-Nevis Labour Party.

He said that the global economic crisis of these past few years has been no joke and has brought the mighty low.

“It has reaped pain and humiliation upon tens of millions across the globe. It has left in its wake bank closures, hospital closures, school closures. People losing their homes, and their jobs. Governments tumbling, currencies crumbling, government checks bouncing. Government pay cuts looming. Massive Government firings. Development projects halted. In countries large and small. Yet, here, by the grace of God we, in St. Kitts and Nevis, stand. Here, indeed, we stand Comrades. Standing, ducking, bouncing, bounding. Standing firm as we meet the challenges that have been placed before us. Ducking the massive blows that keep hitting governments large and small all across the globe. Bouncing, because, like all champions that is how we keep our keep our energy levels high,” said Dr. Douglas.

He said the bouncing and bounding by his Labour government have resulted in benefits on behalf of the people of St. Kitts and Nevis.

He said bounding by St. Kitts and Nevis also produced a growth rate in 2013 several times greater than another economic powerhouse, the Eurozone Nations, which was unable to produce any growth at all.

“Bounding and setting the minimum wage for government auxiliary workers in St. Kitts and Nevis, higher than the minimum wage in any other Eastern Caribbean country and higher than any in the entire Caribbean with the exception of The Bahamas. Bounding, my Fellow Nationals, and transforming 4,000 average families into land-owners and home-owners, with 1,000 more homes being constructed, in all eight constituencies, under Habitat 30. All of this in the midst of a global crisis. All of this when other islands and other countries, it saddens me to say, are having very different experiences,” said Prime Minister Douglas.

He reiterated that the Labour Government has proven quantity and has delivered time and again.

“And not just for Labour supporters, but for everyone – regardless of political persuasion. That is why in the awarding of contracts, the protection of jobs, and the provision of academic, economic, and other opportunities, the record will show that under this Labour Government, the Federation and all that is has to offer, has been made to benefit us all. And to this, Labour will always be committed,” Dr. Douglas said.

He highlighted that the Federation is on track to become the world’s first sustainable island state as the Government’s commitment to green energy is evident on the nation’s highways, government buildings in the concessions are provided.

Prime Minister Douglas said that what St. Kitts and Nevis deserves, in 2014, 2015 and beyond, therefore, is the competence, the certainty and the stability that has won the Labour Government great praise not only at home, but across the globe.

“What St. Kitts and Nevis cannot afford is the experimentation, the uncertainty, and the miscalculations that have produced such horrendous consequences for islands and nations, near and far. But it was not only the global economic crisis that tested our Party and our Government’s ability to adapt, to re-group, and to continue advancing the interests of the nation, regardless,” Prime Minister Douglas said.

Prime Minister Douglas said whatever the plans of others may be, Kittitians and Nevisians understand and value the effectiveness of this Government at promoting the public good.

“Today, the St. Kitts-Nevis Labour Party today is stronger, we are better, and we are ready!!.”