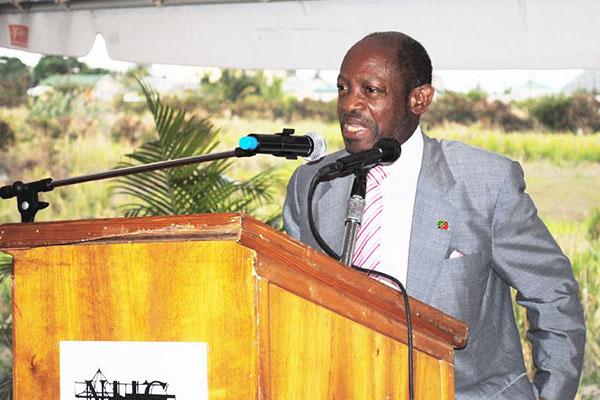 Basseterre, St. Kitts— Prime Minister, the Rt Hon Dr Denzil Douglas, who also has responsibility for Human Resource, has announced that persons training as tradespersons under the People Employment Programme (PEP) will be given the opportunity to gain skills and higher wages by working for the Habitat Independence 30 Housing Programme.

Prime Douglas made the remarks on Tuesday May 6 at Pine Garden Horizons in Central Basseterre during the groundbreaking ceremony for the Habitat Independence 30 Housing Programme, the third since the programme was launched.

“The construction industry is one of the most effective means of stimulating an economy,” observed the Prime Minister. “Home building requires the services of plumbers, electricians, masons, carpenters, roofers and so many other persons in the building trades.”

He said that a development like Habitat 30 will involve massive purchases of building supplies, and will create endless opportunities to those enterprising entrepreneurs, some of who were present at the ceremony, who wish to provide various services for contractors and their workmen.

“It will provide opportunities for some of our own PEP tradesmen to move up from what would have been the learning stage, the acquisition of skills from the PEP programme into employable situations where their skills will be applied and thus they will be able to increase their earnings from that of minimum wage to that of semiskilled and skilled persons,” pointed out Dr Douglas.

According to Prime Minister Douglas who lunched the People Employment Programme in December 2012, the initiative (using PEP tradespersons) was part of ensuring that the permanency of PEP is ascertained.

He explained that it was important as the government wanted to ensure that there is a pool of young people always acquiring skills that can be applied in fully employed situations thus improving the quality of lives of the people and their families as a whole.

“This government which I am honoured to lead pledged to transform lives all across our nation for the better,” said Prime Minister Douglas.

“I am heartened by the confidence the Prime Minister has bestowed on this programme as it will scuttle the talks of naysayers who have been going around suggesting that money being used to train our young persons is going to waste,” said Mr Hanley.

“The money the government has invested in our young people through the PEP has gone to provide skills that the government is now going to use during the construction stage of the Habitat Independence 30 Housing Programme. This ensures that the Government will provide quality housing using home-grown expertise.”

Mr Hanley said that he is looking forward to seeing all the ladies who have been receiving training under the Women in Construction Trades (WICT), a component of the People Employment Programme, put into practise what they have learned. This will involve all trades including electrical, and even those learning landscaping under Parks and Beaches.

“We are on the threshold of providing a trained workforce,” said Mr Hanley. “The Prime Minister has opened the door for our trainees to be put to test, and I am giving the assurance that they will deliver. I am also appealing to those in the private sector to do likewise and use those persons the People Employment Programme has been training.”