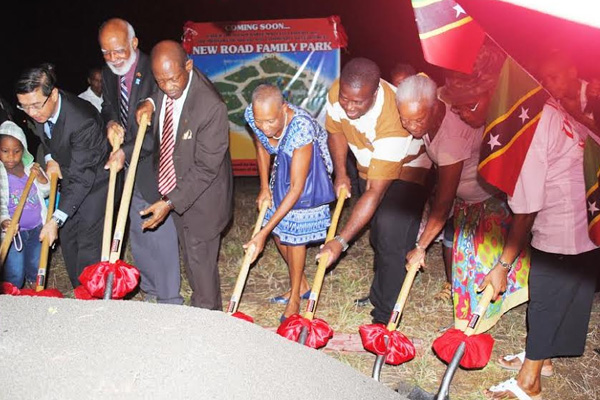 Basseterre, St. Kitts, (CUOPM) — The establishment of a New Road Family Park reflects the seriousness with which the Hon. Marcella Liburd takes her role as Minister of Health, Social and Community Development.

Speaking at Wednesday’s ground breaking ceremony, Prime Minister the Rt. Hon. Dr. Denzil L. Douglas praised the Cabinet’s lone female minister and parliamentarian for her determination to ensure that the nation’s children return to the high levels of free, fun-filled physical activity that were once a standard part of childhood, and which is so important to the physical and psychological health of the young.

“With the advance of modernity, we have all become shockingly sedentary. All of us – regardless of age – move lamentably less than we did in years gone by. Modern life has made it that way. And our nation’s children, like children all over the globe today, are no exception – attached as they have become, to their various electronic devices,” said Prime Minister Douglas, who noted that throughout the Caribbean, health care providers and statisticians have been lamenting the rise in childhood obesity and diabetes.

“Understanding the clear link between obesity and sedentary lifestyles, and understanding the link between diabetes and inactivity, Minister Liburd has imaginatively and skillfully conceived of a development that would provide our country’s children with opportunities to run, and play, and use their bodies, in other words, to have fun while at the same time providing the kind of physical activity that is so important to overall health – at all stages of life,” Dr. Douglas, a physician by training pointed out.

He further pointed out that when completed by April, the “family park,” the equipment, financed by the Republic of China (Taiwan) will see many benches which will “encourage parents, grandparents, aunts and uncles to come to this park with the children to be a part of this aspect of their children’s lives and, in the process, to have the opportunity to interact, in an open, natural setting, with other members of our society as well.”

He is further of the view that true “island life” is becoming more and more a thing of the past – all throughout the Caribbean – as the demands of modern life have made our everyday lives increasingly rushed and the park is one of the ways in which Minister Liburd is attempting to correct this by encouraging a sense of community among the adults who will use the facility.

Dr. Douglas said the new park will encourage opportunities for interaction amongst adults and children as well – an aspect of healthy community life that modern life sometimes makes difficult.

Noting that St. Kitts and Nevis has made great strides in the battle against crime, Dr. Douglas in thanking the police and defense forces for the great strides made, stressed that studies show that the advent of sedentary, electronic-based play throughout the world, has resulted in children having inadequate opportunities for one-on-one or multi-person interaction to experience, cope with, and master the normal childhood disagreements and to practice resolving same.

“Extended human interaction, with its ups and its downs, is key to the proper development of the individual. And modern life’s separating of children from this human-based childhood play, as we used to know it, has been identified as one of the contributing causes to anti-social and deviant behaviour worldwide, and criminal activity, at a later stage, as well,” Dr. Douglas said.

He said Minister Liburd wishes to provide opportunities for the Federation’s young to play, and fuss, and make up, and play again and to understand and cope with the normal ups and downs of human interaction.

“And if this helps them as the years go by to deal with the ups and downs of relations in other areas of life, then we, as a nation, will have all benefited, indeed. So, I commend the Ministry of Social & Community Development once more for this socially constructive initiative, with its multifaceted benefits to our communities, and I look forward to much joyful playing and community bonding, at this very spot, in the years ahead,” Dr. Douglas concluded.