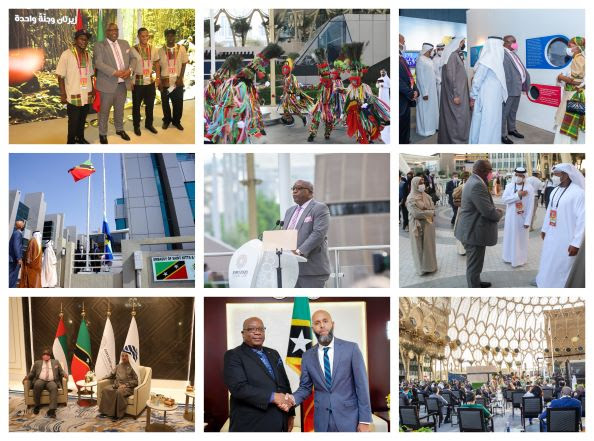 BASSETERRE, St. Kitts, November 20, 2021 (Press Unit in the Office of the Prime Minister) – The Prime Minister of St. Kitts and Nevis, Dr. the Honourable Timothy Harris has returned to the Federation after a hectic but very productive series of engagements in Dubai, the United Arab Emirates.

Prime Minister Harris was a special guest of the Government of the UAE. While in Dubai for the occasion of the EXPO 2020 – a global event – Prime Minister Harris led a delegation to the official observance of St. Kitts and Nevis National Day, which showcased the Federation’s history, culture, hospitality, ambitions and aspirations to the rest of the world.

Dr. Harris gave the featured address at the National Day ceremony where he commended the participants and leadership at the expo for showcasing the best of St. Kitts and Nevis, and for highlighting that the nation’s ability and capability to excel was not constrained by the small size of the country. The honourable prime minister also commended the Government of the UAE for the courtesy and support it extended to the Federation’s delegation.

Prime Minister Harris’ delegation toured the St. Kitts and Nevis Pavilion and that of the host country and Russia. Bilateral discussions then took place with high level representatives of both countries.

While in the UAE, hundreds of citizens of St. Kitts and Nevis received an update on the positive strides being made to put the country on the right track to growth and development. This update was given during a special reception held in the ballroom of the Five Seasons Hotel in Dubai.

Furthermore, the St. Kitts and Nevis Embassy in Abu Dhabi was officially opened by Prime Minister Harris during a ceremony attended by Minister of State in the Ministry of Foreign Affairs and International Cooperation of the UAE, His Excellency Khalifa Shaheen Almarar and other high level officials of the host country, diplomats and members of the Consular Corps in the UAE, including Resident Ambassador of the Commonwealth of Dominica to the UAE, His Excellency Hubert Charles.

While in the United Arab Emirates, Prime Minister Harris also held bilateral talks with the Director of Economic Affairs of the Republic of China (Taiwan), agents and stakeholders in our country’s Citizenship by Investment (CBI) programme, as well as citizens and prospective investors in the CBI programme.

Among the high ranking officials who accompanied Prime Minister Harris on his official visit to the United Arab Emirates were the Honourable Eugene Hamilton; Ambassador His Excellency Ian Patches Liburd, the Federation’s Permanent Representative to the United Nations, and St. Kitts and Nevis’ Ambassador to the UAE, His Excellency Justin Hawley.

Prime Minister Harris is now expected to engage in a series of planned public events in the coming days, after his quarantine period. These include a church service on Sunday, November 21, presiding over Cabinet meetings and hosting of the popular Leadership Matters programme on Tuesday, November 23.