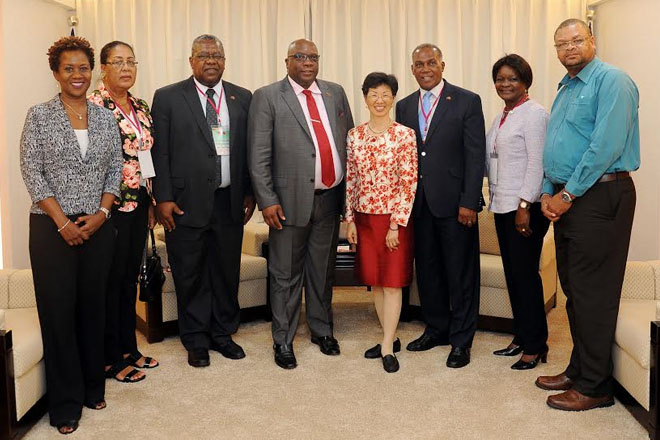 (SKNIS)—Prime Minister Dr. the Honourable Timothy Harris, along with his delegation, wrapped up a productive official visit to the Republic of China (Taiwan) from May 19-24 where they participated in the inauguration of the 14th President of the Republic of China, Dr. Tsai Ing-Wen and Vice President, Dr. Chen Chien-jen, on May 20. President Tsai is the first woman ever to be elected to that post.

Ms. Chang received the St. Kitts-Nevis delegation with warmth as she had served as The Republic of China’s Ambassador to St. Kitts and Nevis from 1997-2001. She remembered many good things about St. Kitts and spoke fondly of her memories of people and places that had left an indelible mark upon her.

Prime Minister Harris, who has known Ms. Chang for many years, brought greetings to her on behalf of the Government and people of St. Kitts and congratulated her in her new role. The prime minister impressed upon Minister Chang that the relationship between St. Kitts and Nevis and the Republic of China has remained strong and reliable over 32 years and that his Government intends to remain a friend of Taiwan by deepening the partnership and strengthening the networks between the two countries.

Minister Chang said that the policy of her Government with respect to Taiwan-China relations is maintaining the status quo of good trade relationships but yet holding to their strong democratic values without being contentious.

In her inaugural presidential address, President Tsai spoke to regional peace and stability and cross-strait relations.

“Since 1992, over twenty-years of interactions and negotiations across the strait have enabled and accumulated outcomes which both sides must collectively cherish and sustain; and it is based on such existing realities and political foundations that the stable and peaceful development of the cross-strait relationship must be continuously promoted,” President Tsai said, while emphasizing that her new Government will conduct cross-strait affairs in accordance with the Republic of China Constitution, the Act Governing Relations Between the People of Taiwan Area and the Mainland Area, and other relevant legislation.

In wrapping up his discussion with Minister Chang, Prime Minister Harris recounted some of the highlights of the trip which included a visit to the Taiwan High Court (E-Court), The Taipei City Police Department CCTV Center, the Swearing-in Ceremony, visit to the Shilin Presidential Garden, courtesy call on President H.E. Dr. Tsai Ing-wen, Meeting at Embassy of St. Kitts and Nevis with St. Kitts and Nevis students, visit to Gold Museum and visit to Penghu County.

Prime Minister Harris said that talks with officials were productive in reaping fruit for further collaboration and cooperation with Taiwan in law enforcement, fisheries, tourism and support for public infrastructure. The prime minister thanked the Government and people of Taiwan for their remarkable hospitality and gratuitous invitation to visit Taiwan.