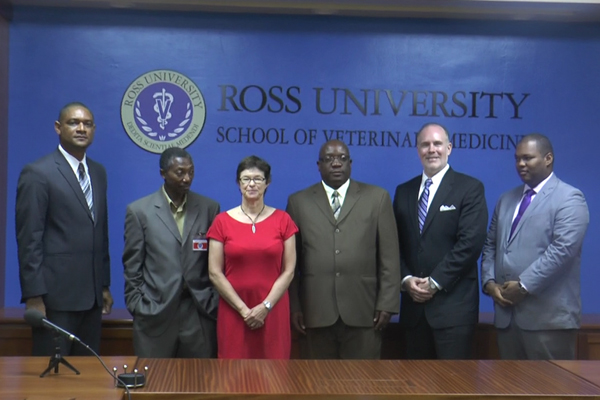 (ZIZ News) — “We’re excited about his leadership. He has a vision that will take this country forward and Ross University, as well as Devry Education Group and other coalition partners, are thrilled to partner with him and bring education, investment and security technology to the island,” said Vice President of Civic Affairs for Devry Medical International John Kroen.

He spoke on Tuesday following a meeting with the country’s Prime Minister, Hon. Dr. Timothy Harris.

The meeting was held at Ross University School of Veterinary Medicine and addressed the institution’s desire to work more closely with the Government of St. Kitts and Nevis under the leadership of Prime Minister Harris and his team.

During the meeting, Prime Minister Harris, who also serves as Minister of National Security, was exposed to some of the high level techniques that Ross University had employed to ensure a safe environment for its staff and students. He told ZIZ News that he was impressed with what he saw.

“The matter of greater collaboration with our security forces in the area of technology transfer, that was an important one because as part of the tour of the facilities, we were able to see state of the art system of surveillance and monitoring which we believe could add value to the police in their work to keep us safe and secure and therefore, this is an area for ongoing collaboration which we have invited them to consider,” Prime Minister Harris noted.