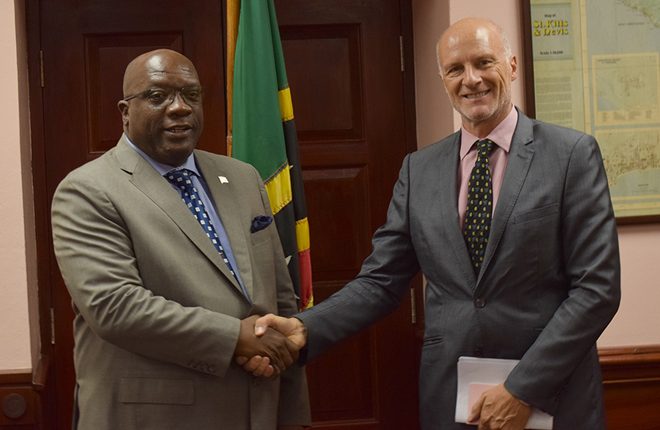 BASSETERRE, St. Kitts, October 3, 2018 (Press Unit in the Office of the Prime Minister) – Special Envoy of the Republic of Italy for Caribbean countries, His Excellency Roberto Natali, paid a courtesy call on St. Kitts and Nevis Prime Minister, Dr. the Honourable Timothy Harris, at his office at Government Headquarters today, Wednesday, October 3, 2018.

Prime Minister Harris and His Excellency Natali engaged in lengthy and frank discussions on a number of matters including Italy’s bid to be a member of the United Nation’s Human Rights Council, as well as bilateral cooperation in areas of climate change and renewable energy development.

Describing the relationship between St. Kitts and Nevis and the Republic of Italy as “strong and amicable,” Prime Minister Harris said the Federation has benefited from much needed assistance through a Memorandum of Understanding (MOU) on Climate Change, where Italy’s Environment Ministry allocated six million Euros towards boosting initiatives in CARICOM Member States that are aimed at developing renewable energies and mitigating the negative impacts of climate change.

Dr. Harris said, “We certainly do welcome Italy’s leadership on issues to do with climate change, we do commend the support that has been provided in carving out certain resources for climate change activities in the context of the Caribbean, and some of which St. Kitts and Nevis has been able to benefit from, or least we have had approval for a project proposal.”

In addition to the MOU on climate change, the Italian Cooperation has also granted two million dollars to the Food and Agriculture Organization (FAO) trust fund to assist Small Island Developing States with protecting their agricultural sectors from climate change. St. Kitts and Nevis is among the nine (9) beneficiary countries.

As he did during his presentation to the United Nations General Assembly on Friday, September 28, Prime Minister Harris again raised the issue of an unfair international financial architecture with the Italian Special Envoy, particularly as it relates to what he described as the “discriminatory and irrational blacklisting of countries”.

“We have a great difficulty with the EU [European Union] methodology, process and approach and we find it inconsistent because some of the countries that are being blacklisted by the EU are largely compliant within the context of the global forum within the OECD structure, which the EU is a part, and so we are saying there needs to be some reconciling of these approach and our preference would be that there be one system of scrutiny,” Dr. Harris explained.

The St. Kitts and Nevis Prime Minister urged His Excellency Natali to be a voice for the Caribbean region in this regard.

Prime Minister Harris also used his meeting with the visiting Special Envoy to reiterate a call for high-level dialogue on this very important matter between EU member states and CARICOM countries.