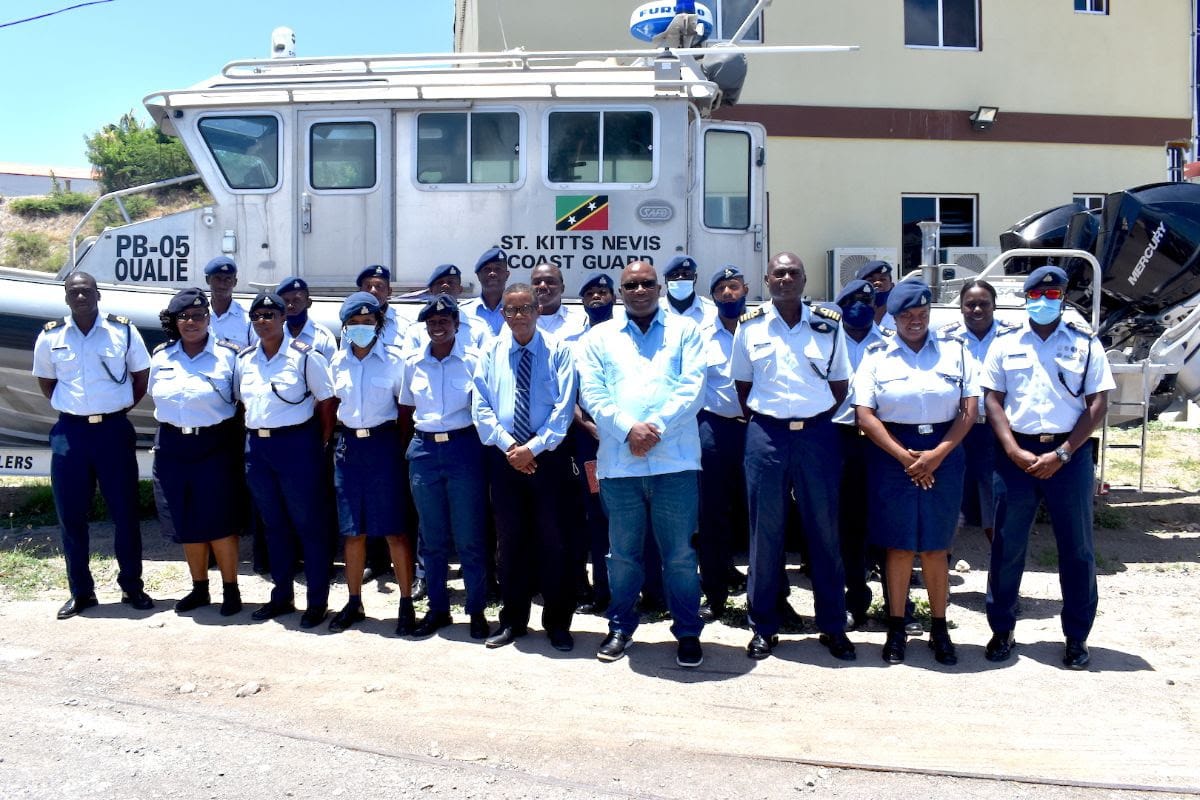 BASSETERRE, St. Kitts, June 21, 2022 (Press Unit in the Office of the Prime Minister) – Prime Minister and Minister of National Security, Dr. the Honourable Timothy Harris sat down with officers of the St. Kitts-Nevis Defence Force (SKNDF) Coast Guard Unit earlier today (Tuesday, June 21) to listen to their concerns and suggestions on how the operations of the unit can be improved.

While there, Prime Minister Harris impressed upon the coast guard officers the importance of the services they provide to the country and gave the assurance that his Government remains committed to doing all it can to assist in the continued development of the Coast Guard Unit.

“I first want to acknowledge the important role which the officers of our defence force play in advancing the security agenda of the state. Law and order is the most important duty of a nation-state and therefore we have to ensure that we keep the peace at all times [and ensure] that the laws are being enforced and respected,” said Prime Minister Harris.

The honourable prime minister went on to commend the men and women of the Coast Guard Unit “for your participation in this critical area of our national life.” He added, “Of course, when security fails everything collapses and a country becomes a failed state and that is why we have to, at all times, ensure that we give good consideration to areas of law and order.”

Dr. Harris reminded the officers that the Government of St. Kitts and Nevis, under his leadership, has made historic budgetary allocations to the national security infrastructure over the years.

“In fact, in one year we budgeted as much as $99 million to assist the broad spheres of law enforcement—the defence force, the police, the fire. All those units were being covered. Very early in our first-time term, we invested significantly in the fleet that was available to the defence force. We invested significantly in the training and the upgrade of facilitates for the defence force, and of course, the coast guard headquarters, which had been too long in coming, really is another area where we have invested,” said Prime Minister Harris.

The prime minister was accompanied today by Permanent Secretary in the Ministry of National Security, Mr. Osmond Petty; National Security Advisor, Retired Major General Stewart Saunders and Commander of St. Kitts and Nevis Defence Force, Lieutenant Colonel J. Anthony Comrie, all of whom welcomed and responded to questions posed to them by the rank and file of the Coast Guard Unit.