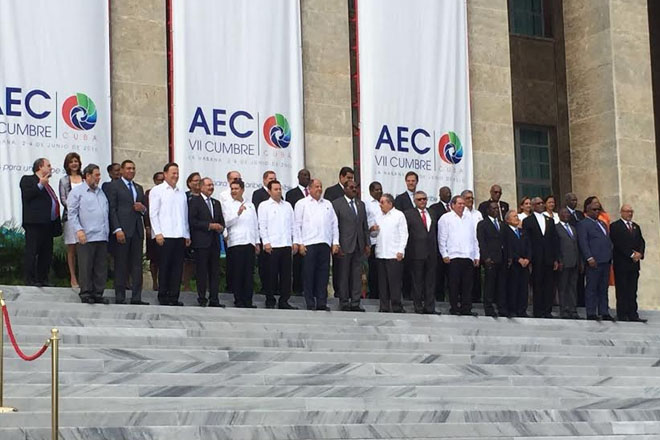 (SKNIS): Prime Minister Dr. the Honourable Timothy Harris, along with a delegation, is attending The VII Summit of the ACS (Association of Caribbean States) Heads of State and/or Government in Havana, Cuba, on June 04, 2016.

The theme of this year’s summit is “Together for a Sustainable Caribbean”. The theme reflects the hard work, priority and dedication of the ACS in achieving sustainable development throughout the Small Island Developing States (SIDS) of the Greater Caribbean Region. The Havana Summit is a continuation of the joint efforts to revitalize the vision of the ACS for a stronger and more united Greater Caribbean as well as to promote sustainability, as was expressed in the Declaration of Petion-Ville, Haiti, of April 13th, 2013.

The Summit will pay particular attention to the protection and preservation of the Region’s common heritage, the Caribbean Sea, which would use as its point of departure the Caribbean Sea Commission of the ACS, which was established in 2006 to promote and oversee the sustainable use of the Caribbean Sea. Some of the challenges with respect to the Caribbean Sea are the impacts of Sargassum Seaweed, Lionfish Invasion and Coastal Erosion.

The Summit will see the departure of Secretary General, His Excellency Alfonso David Múnera Cavadía, from Colombia, who served the Association from 2012 and whose four year tenure of office will end in June 2016. A new Secretary General, in the person of Dr. June Soomer, from St. Lucia, will head the ACS for the next four years; she will take up the position from August 1, 2016.

The Summit will also look at the Draft Declaration to continue the work of the ACS and the Plan of Action to enhance the organization for the next two years, 2016-2018.

All CARICOM Member States are represented at the Summit including St. Kitts and Nevis, Antigua and Barbuda, Trinidad and Tobago, Guyana, St. Vincent and the Grenadines, Grenada, Jamaica and Dominica. Associate Member States of the ACS in attendance include Aruba.