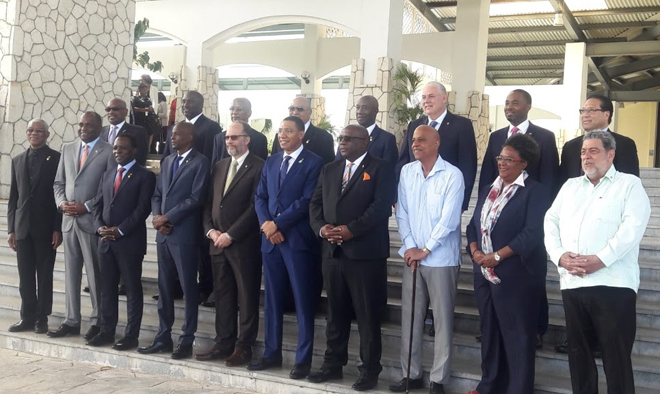 (Press Unit in the Office of the Prime Minister) – The Prime Minister of St. Kitts and Nevis, Dr. the Honourable Timothy Harris, used the recently concluded Thirty-Ninth Regular Meeting of the Conference of Heads of Government of the Caribbean Community (CARICOM) from July 4-6 to advance discussions on the prevention and control of Non-Communicable Diseases (NCDs) in the Caribbean region.

Prime Minister Harris, in his capacity as Lead Head in CARICOM’s Quasi-Cabinet for Human Resource Development and Health, called attention to the third United Nations (UN) High-Level Meeting on Non-Communicable Diseases (NCDs) to be held on September 27, 2018, at the UN Headquarters, New York.

At the UN meeting, world leaders are expected to undertake a comprehensive review of the global and national progress achieved in putting measures in place that protect people from dying too young from heart and lung diseases, cancers and diabetes.

In this regard, Prime Minister Harris strongly encouraged CARICOM Member States to be represented at the highest level at the upcoming meeting and reminded regional leaders that CARICOM was the body that initiated attention to the threat of NCDs and having it placed as a priority on the international agenda, which ultimately led to the first UN High Level Meeting on the Prevention and Control of NCDs in 2011.

Furthermore, Dr. Harris outlined six priority areas on which the region should advocate for, including establishing and maintaining a smoke-free status for the region; implementing policies geared towards preventing childhood obesity; promoting the elimination of cancer of the cervix; support for mitigation of post-disaster vulnerabilities related to NCDs, in particular nutrition, treatment and care; increasing international financing and technical support; and strengthening accountability through national coordinating mechanisms.

The St. Kitts and Nevis Prime Minister, who hosts regular health walks in his constituency, also commended the contribution of civil society organisations to regional efforts to counter NCDs.

Prime Minister Harris expressed gratitude to the Pan American Health Organisation (PAHO) and the World Health Organization (WHO) for the support provided to the CARICOM region’s preparations for the third High-Level Meeting.