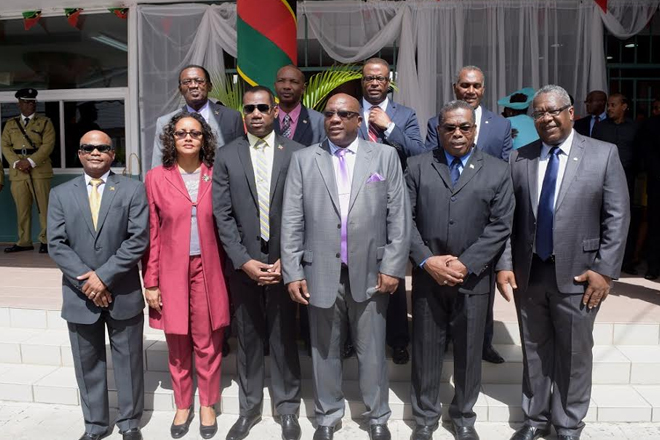 (SKNIS)—Prime Minister Dr. the Honourable Timothy Harris is praising and thanking his Government and people for making St. Kitts and Nevis a more prosperous and democratic country to live in on the 1st anniversary since the Government swept to power on February 16, 2015.

Dr. Harris says that the people were liberated from the hands of those who were taking the country down a dark undemocratic road and that the people rejected going down that road because they knew where it would lead—a reversing of the democratic progress that we had made as a nation. He said that in one year, his government has taken several steps in restoring democracy to St. Kitts and Nevis after the travesty meted out on the country and its people on the infamous day of January 16, 2015.

Prime Minister Harris said that order and decorum are returning to the Federal Parliament and that his government has met the Constitutional obligation of appointing a Deputy Speaker of the National Assembly.

Dr. Harris commended his young government for achieving much more in just one year.

Some of these achievements include the removal of the Value Added Tax (VAT) from food, medicine and funeral expenses; $16 million EC payout to disenfranchised former sugar workers, $25 million EC to Nevis in budgetary support and the ending of the shift system at the environmentally health plagued Basseterre High School (BHS) by building a temporary structure with plans of a new BHS in the near future.

Other achievements include recording the best ever “VAT Day” revenue in the history of the country; recalibration and resuscitation of the Citizenship-by-Investment programme that was mired in controversy; establishment of the Criminal Justice Strategic Board; establishment of the National ICT Governance Board; successful hosting of CPL and Carifta Games; renaming of national athletic stadium in honour of Kim Collins; declaration of first prime minister of St. Kitts and Nevis, The Right Honourable Sir Kennedy Simmonds, as a national hero; geothermal development on St. Kitts; passage of new legislation for renewable energy; and establishment of farms for PEP Workers in Cayon and Phillips.

Prime Minister Harris, who is also the Minister of National Security, has received high praise for the successful installation of a new Police High Command (led by Commissioner Ian Queeley), with 156 years of service between them. They are all experienced officers. Prime Minister Harris has also installed a capable new superintendent of Prisons, Mr. Junie Hodge.

He revealed plans by his government to improve the health system by reaching out and helping the mentally ill in constructing a mental health facility and the addition of an oncology center at the Joseph N. France Hospital. He also said that the Mary Charles Hospital in Molineux was under renovation so that it can deliver improved health care services to the people in its environs. He also said that the government will soon launch its housing programme.