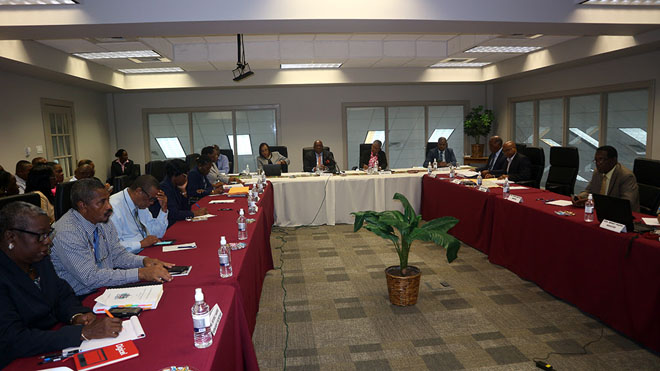 Senior level government officials, including cabinet ministers, permanent secretaries and heads of departments, gathered at the Ministry of Finance conference room on, Monday October 15th to commence high-level discussions that will further shape the 2019 budget for St. Kitts and Nevis.

This is being done through the three-day 2019 budget estimates committee meetings which are being lead by Prime Minister and Minister of Finance, Dr. The Honourable Timothy Harris.

During the budget estimates committee meetings, line Ministries are required to present their plans for the upcoming budget year, account for their performance or lack thereof during the current year and assure cabinet that their policies, programmes and activities are being pursued with diligence, care and in accordance with the law and best practices.

The Ministry of Finance has worked with the various line ministries to develop the draft 2019 estimates, which will be discussed at length over the next three days.

During the opening session of the meeting, Prime Minister Harris stated that the budget process is a very ‘long and tedious’ exercise but one that is very necessary. Dr. Harris further stated that the framework is also designed to maintain the good fiscal record which he says the Team Unity Administration has achieved over the last three years. He referenced the findings of the latest report of the Eastern Caribbean Central Bank (ECCB) which pointed to improvements in all economic indicators for the first half of 2018.

The meeting saw presentations from the Office of the Governor General, the National Audit Office, the Ministry of International Trade, Ministry of Tourism, Department of Social Services and Community Development, Foreign Affairs and the Ministry of Labour.