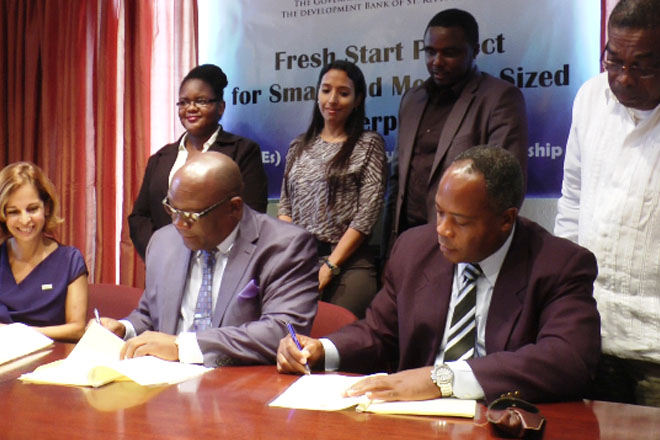 Prime Minister Harris Proud of Partnership with Government of Venezuela

(ZIZ News) — Prime Minister, Hon. Dr. Timothy Harris has spoken with pride of his administration’s partnership with the Bolivarian Republic of Venezuela.

During Thursday morning’s Fresh Start Programme Agreement signing at the Development Bank of St. Kitts and Nevis, Dr. Harris said so far, his administration had secured two major initiatives with the Government and people of Venezuela, through the PDVSA arrangement.

“In the first initiative, which we publicised at an event of the Cabinet, we were able to secure EC$16 million to satisfy the felt needs of former sugar workers who felt short changed when, in 2005, the industry was closed. That EC$16 million will be made available on the 18th of September when we make the payout,” he explained.

The Fresh Start Programme was the second major initiative of which Dr. Harris spoke.

“It says in part…to remove the equity hurdle requirement where it represents a barrier to the target group starting or rebuilding of a small, medium sized business venture. So we’re targeting the SMEs,” he said.

While speaking of the strong partnership between both governments, Dr. Harris thanked the representatives of PDVSA for their assistance.

“I want to thank Maria for leading the PDVSA entity here in St. Kitts and Nevis for her consistent support. I want to thank her representative on that committee who has provided very good advice to us in regard to that particular payout but also allow the Government of Venezuela, through him as their representative, to be kept fully seized of what has been going on in an era of transparency,” Dr. Harris said.