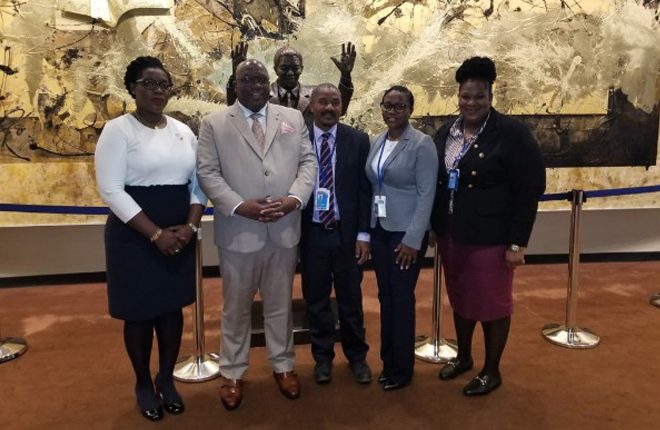 Prime Minister Harris had the pleasure of joining with family members, other dignitaries, friends and well-wishers to celebrate the life of the late His Excellency Cedric Lanyon Harper, High Commissioner of St Kitts and Nevis to Jamaica, before journeying to the United States to engage in the General Debate of the 73rd Session of the United Nations General Assembly among other official engagements.

Dr. Harris was accompanied by the Minister of Foreign Affairs, the Honourable Mark Brantley, on both visits to Jamaica and the United Nations (UN). The delegation at the UN General Assembly also included Senator Hon. Wendy Phipps; Permanent Representative to the United Nations, His Excellency Sam Condor; Permanent Secretary in Office of the Prime Minister, Osbert DeSuza; and Director in the Office of the Prime Minister, Chelesa Rawlins, as well as staff members of the St. Kitts and Nevis’ Permanent Mission to the UN in New York.

“I am pleased to report that all official business went exceedingly well. It was a relatively small delegation as usually the delegations of St. Kitts and Nevis are. We had to do a lot of logistics to ensure that not only we did justice to the cause of St. Kitts and Nevis but we also did justice to our obligations as CARICOM lead spokesperson on matters of Health, Human Resource and HIV by attending the forum,” stated Prime Minister Harris. “I personally had to participate in about four regional forums dealing with the matter of Non-Communicable Diseases, while getting myself ready to make presentation of the country’s statement to the UN General Assembly.”

While in New York, Prime Minister Harris participated in two highly successful events relating to the diaspora. These included the Cocktail Reception hosted by St. Kitts and Nevis’ Permanent Mission to the United Nations and the 35thAnniversary Service hosted by the Kittitian American Benevolent Association (KABA). Both events, he said, “saw one of the largest number of attendees ever in their history. He used the occasion to express appreciation to the scores of citizens who attended the UN General Assembly to show solidarity and be associated with the St. Kitts and Nevis product.

“Everywhere there was the display of love and patriotism and it was really infectious. And it reminded me of the similar display of patriotism and pride that I observed at our Independence parade here,” he said, while extending thanks to all who made the 35th Anniversary of Independence celebrations a success.