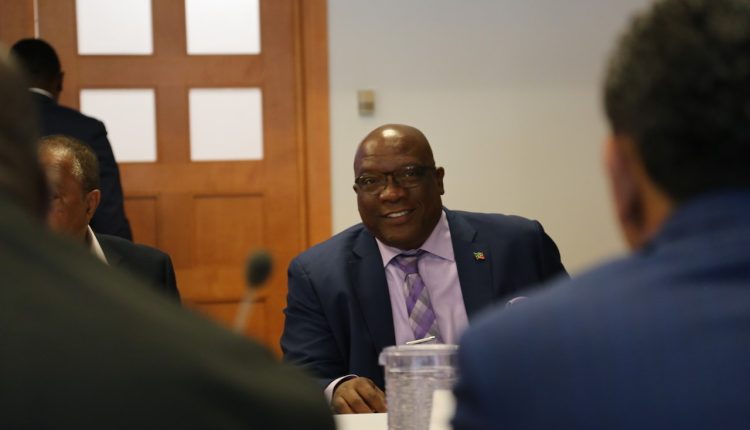 (Press Secretary in the Office of the Prime Minister):

Yesterday, Friday, in wrapping up the conference, the ECCB Governor expressed appreciation for Dr. the Honourable Timothy Harris’ “presence as Prime Minister, as CARICOM Chairman and Member of the Monetary Council of the Eastern Caribbean Central Bank.”  The meeting was held at the International Finance Corporation (IFC), a member of the World Bank Group headquartered in Washington, D.C.

Addressing the Prime Minister of St. Kitts and Nevis, Mr. Antoine said, “You have to know that the wind is behind you.  I think we felt that sense of support in your presence with us today and yesterday.”

The ECCB Governor continued, “We have great expectations for this project,” adding, “You’ve set out what the next steps are – for us to look at the countries’ priorities, but within a regional frame.”

Prime Minister Harris said “a special thank you” to both the Governor of the Eastern Caribbean Central Bank and Ms. Tahseen Sayed, Director for the Caribbean Region at the World Bank for their “herculean efforts in organizing this remarkable workshop.”

The Prime Minister of St. Kitts and Nevis went on to note that, “Regional leadership has been taken to a higher plateau over the last two days” as he reiterated the importance of creating opportunities for the benefit of the people of the Caribbean.

Addressing the participants on Thursday, the first day, the Governor of the Eastern Caribbean Central Bank said, “When we look back at this conference 10 years from now, we will say this was a pivotal moment.”