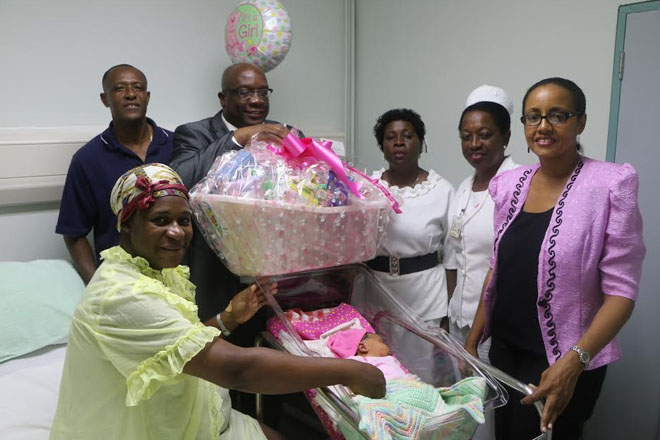 “Indee”, nick-named after Independence, weighed 9 pounds and 10 ounces when she was born.

Visiting the proud family at the Joseph Nathaniel France (JNF) Hospital on September 21, Prime Minister Dr. the Honourable Timothy Harris congratulated them. Dr. Harris indicated that he went to the hospital on Independence Day, but the mother was still in labour.

“This is the independence baby and we are pleased to introduce her to the nation, Prime Minister Harris said. “We are happy to know she’s in good health”.

Dr. Harris said that “Indee” is special in the context of independence, being the first independence baby under a Team Unity Administration.

Minister Phipps presented the parents of Baby “Indee” with a basket of baby products and assured the smiling and grateful parents of the government’s continued support.

Prime Minister Harris and Minister Phipps then continued their tour of the entire Maternity Ward, greeting and congratulating the other mothers.