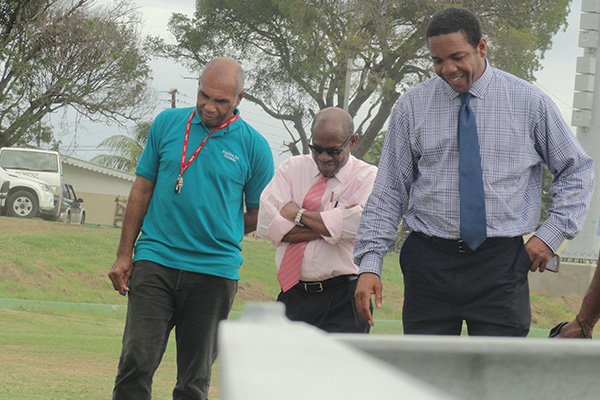 (ZIZ) — Prime Minister, the Right Honorable Dr. Denzil Douglas toured the newly reconstructed facilities of the Warner Park Cricket Stadium on Thursday, assessing the progress that has been made.

Prime Minister Douglas states that the renovations allow Warner Park to compete with other sporting facilities in the region.

During the tour, the Prime Minister was quoted as saying, “This is lifting the Warner Park cricket facilities to a further high internationally. In fact, maybe putting us at the top of the competitive scale compared to other facilities in the Caribbean region.”

The prime minister further stated that this facility is a worthwhile venture for St. Kitts and Nevis as the returns through investment in services and sports will be beneficial to the country.

This Warner Park Lighting Project has already seen the installation of a jumbotron and the erection of the light poles.

The process of installation the lights was halted by strong Tradewinds passing through the island, however, officials are confident the project will be completed on schedule.