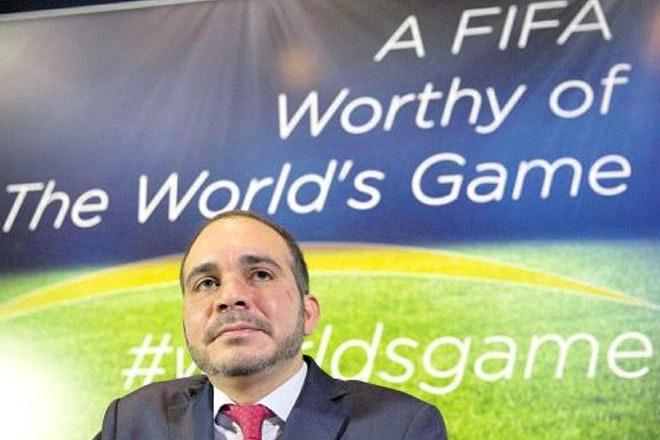 Manchester, United Kingdom (AFP) — Prince Ali bin al Hussein, who led a challenge against FIFA president Sepp Blatter this year, said Monday that world football leaders must have known about the corruption that has rocked the governing body.

But the former FIFA vice president from Jordan is still not saying whether he will take on UEFA leader Michel Platini and South Korean tycoon Chung Mong-Joon for the FIFA presidency in a vote in February.

Prince Ali said the FIFA brand is now “extremely damaged” and that its top leaders could not escape the spotlight caused by the arrest of seven FIFA officials in a Zurich hotel in May on US bribery charges.

“I do believe that anything that happened within FIFA was known within the leadership of FIFA,” the prince said at the Soccerex convention in Manchester. “There is no way that is not the case.”

Members of the executive committee “undoubtedly” knew what was going on in football deals, he added.

“If a player or if somebody breaks the rules then they are punished regardless of where they come from, Ok so why is the executive committee different.”

The prince also said Blatter “should take responsibility” and stand down immediately. The longstanding FIFA president said he will give up when the special election is held in February.

FIFA has been embroiled in a major corruption scandal since the arrest of the seven officials on May 27th. They are among 14 people charged by US authorities over more than $150 million in bribes given for television and marketing deals.

The prince challenged Blatter for the FIFA presidency two days later but gave up after the first round of voting. The prince said he is still talking with national associations about standing in the new race.

When asked how long his decision would take, the prince said “not for very long”. An announcement is expected within days.

“Right now we need a candidate who is forward-thinking, brings new ideas and not tainted by the past,” he said.

Frenchman Platini is favourite to win but the prince the election but the prince said he should not be running FIFA as he came into the organisation as a Blatter “protege.”

The prince said he believed he could win if he stands.

“If done correctly, cleanly, properly and without interference I believe I can for sure,” he said.

October 26th is the deadline for candidates to declare. On top of Platini and Chung, Brazilian football legend Zico has also said he will run.

All must get five of FIFA’s national associations to sign their candidacy to get into the election. Some could struggle.