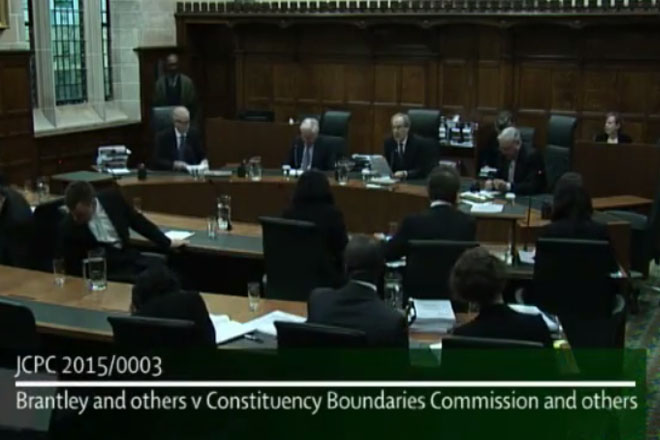 (ZIZ News) — In a written decision delivered on Monday 11th May 2015, the Privy Council explained its reasons for rejecting the former government’s attempt to change the constituency boundaries.

On February 12th 2015, the Privy Council ordered that the elections set for 16th February had to take place on the existing boundaries, and not on the boundary changes that the former government proposed.

The Privy Council has fully accepted the submissions made on behalf of the appellants: Mark Brantley, Dr. Timothy Harris, Shawn Richards, and Sam Condor.

Relying on the evidence they filed, the Privy Council determined that the proclamation to change the boundaries was not made until the afternoon of Tuesday 20th January 2015 when it was first made available to the general public in the official gazette.

As a result, the Privy Council has found that the dissolution of parliament “which unquestionably occurred with effect from 16 January, predated the ‘making’ of the impugned proclamation”. The consequence of this, under the constitution, was that the election had to take place under the existing boundaries.

The Privy Council also considered the question of whether a deliberate attempt to prevent the court from reviewing a report of the boundaries commission would be unconstitutional because it was contrary to the rule of law.

The law Lords explained that “there is at least a strongly arguable case” that such a deliberate attempt by one branch of government (the former Labour administration) to prevent access to the court for constitutional relief would be unconstitutional as it would deny the protection of the law. The court also found that it is strongly arguable that this would nullify the proclamation to change the constituency boundaries and stated that the proclamation could be quashed under the normal principles of judicial review.

The ruling represents a landmark decision on the interpretation of section 50(6) of the constitution. Commenting on the decision, Prime Minister, Hon. Dr. Timothy Harris stated, “in the face of the sinister, anti-democratic and unconstitutional actions of the former Douglas regime on the evening of Friday 16th January 2015, in which abrupt boundary changes were wrongly imposed on the people in a sham sitting of parliament just before the parliament was dissolved, we had to take decisive action to defend the democratic rights of the people of St. Kitts and Nevis.

It is ironic that Douglas’ own indecent haste to impose new boundaries caused him to dissolve the parliament before the boundaries proclamation was properly made. In doing so, it was Douglas himself who ensured that the existing boundaries had to be used for the election.