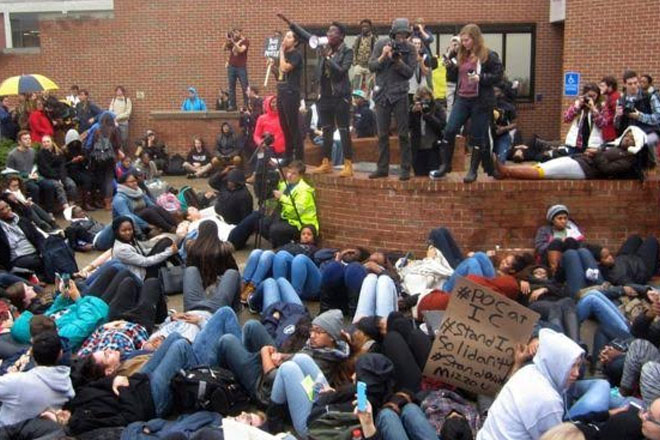 Protests over racial issues spread to more US campuses

(BBC) Protests against racial injustice have spread beyond the University of Missouri as students at least two other US campuses have walked out of classes.

Rallies were held on Wednesday at Ithaca College in New York and Smith College in Massachusetts.

The president of the University of Missouri was ousted on Monday after students said he did not do enough to address racism.

Students at over 20 campuses have planned solidarity protests this week.

At Ithaca College, the demonstrators are also seeking changes in campus leadership.

On Wednesday, protesters chanted “Tom Rochon – no confidence”, referring to the college’s president.

“With University of Missouri’s president stepping down, we demand Rochon to do the same as it is vital to fight against both covert and overt racism in all places of education and empowerment,” the protesters said in a statement.

The protesters say Mr Rochon has failed to increase the number of minority students who attend Ithaca, among other complaints.

Protests were also held at Yale University in Connecticut after administrators sent out an email advising students about offensive Halloween costumes.

The email has set off a debate about free speech and cultural sensitivity on the mostly white campus.

Meanwhile, in Missouri, police have arrested another person who made anonymous death threats against black students through the messaging app Yik Yak.

“I’m gonna shoot any black people tomorrow, so be ready,” read one of the threatening messages posted online.

The company that operates Yik Yak warned users that it would report threatening messages to authorities.