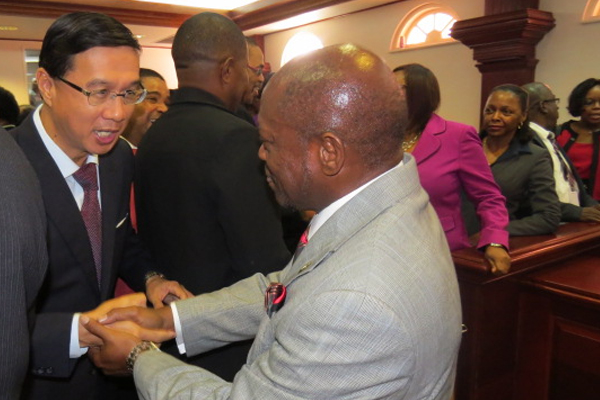 Public Debt reduced to 81 percent of GDP, better performance in 2014

Basseterre, St. Kitts (CUOPM) — St. Kitts and Nevis is projecting an even better performance for fiscal 2014 than 2013 and has reduced its total public sector debt from EC$2.9 billion to EC$1.8 billion or 81% of GDP.

St. Kitts and Nevis’ Prime Minister and Minister of Finance, the Rt. Hon. Dr. Denzil L. Douglas in his presentation of the 2015 Budget Address on Tuesday also disclosed that for that fiscal year, Recurrent Revenue is expected to be in the region of $746.2 million or 7.8% higher than the amount realised in 2013 and 44.2% above the estimate.

“The various categories that comprise Tax Revenue are projected to exceed collections for 2013 but would yield mixed results in comparison to the estimates with Taxes on Property and Taxes on International Trade and Transactions falling slightly below the estimated amount by 3.4% and 0.7% respectively,” Prime Minister Douglas said.

He pointed out that inflows from the Citizenship by Investment Programme will continue to have a strong influence on Non-Tax Revenue which is expected to fall slightly below the 2013 amount by $0.3 million but will surpass the 2014 Estimate by approximately $207.8 million.

“Recurrent Expenditure is projected to reach $462.8 million, 3.6% and 3.5% above the amount incurred for 2013 and the 2014 estimates respectively. However, Capital Expenditure and Net Lending which is expected to be $105.1 million would be 20.4% below the amount spent in 2013 and 2.3% less than the budgeted amount. With these results, we are anticipating that we would realize a Recurrent Account Surplus of about $283.4 million, an Overall Surplus of $247.1 million and a Primary Surplus of $305.9 million,” said Dr. Douglas.

He recalled that in 2011 his Government took a bold and unpopular decision to undertake a comprehensive restructuring of the public debt.

“At that time, the public sector debt stood at $2.9 billion or 147% of GDP. Today, Mr. Speaker, I can report that at the end of September 2014 the total public sector debt was $1.8 billion or 81% of GDP – 37% or $1.1 billion less than what it was when we made the decision to restructure. The significant reduction in the debt stock was made possible, in large measure, by the Debt for Land swap which resulted in a decrease of $767.8 million in the debt. This was in addition to the $130.9 million decline as a result of the exchange of some of our existing debt instruments for new instruments and the cancellation of a $9.7 million debt by the UK Department for International Development (DFID),” Dr. Douglas told the Budget Session of the St. Kitts and Nevis National Assembly.

“The public sector debt is firmly trending downwards and is projected to decrease at a pace which will see us meeting the ECCB’s target of 60% of GDP in 2017 – 3 years ahead of the 2020 timeline,” said Prime Minister Douglas, who pointed out that one of the underlying assumptions of this projection is that the Nevis Island Administration will conclude its Debt for Land swap in the very near future.

Prime Minister Douglas noted that the impact of the restructuring did not only reduce the stock of public sector debt but also the annual interest payments for the Federal Government, the NIA and some public corporations.

“This has provided us with some fiscal space which we will use to undertake activities that would further develop our human capital and energize growth in our Federation. The actions we have taken with respect to the debt are very much in line with the overall objective of our Medium-Term Debt Management Strategy which is to steadily reduce the public debt in a manner that minimizes cost and risk. Our Medium-Term Debt Management Strategy was first laid before this Honourable House in April 2013 and covered the period 2013 – 2015. Since then, we have made significant progress and therefore thought it fitting to update the Strategy as we chart the way forward and plan for the upcoming years, 2015 – 2017,” said Prime Minister Douglas.

Looking ahead, he stated that his government is conscious of the need to consolidate the recovery while at the same time sustaining the gains of the adjustment programme.

He said that i broad terms, this Budget is designed to maintain the Government’s policy stance of prudent fiscal management and simultaneously provide for public sector support for strategic investments and that the Budget and Medium Term Fiscal Framework are therefore guided by three guiding principles which are natural progression of values adopted in 2014.

“We will continue to be judicious in our plans for expansion in expenditure and recognise the need for reasonable increases in capital spending to stimulate growth. The second principle commits the Government to accelerate the pace of debt reduction to create greater fiscal space to support investment in physical infrastructure and human capital development. The third principle is grounded in the commitment of my Government to saving a portion of any surplus generated to facilitate the build-up of policy buffers to fill any fiscal gap that may result from adverse shocks in the future,” said Prime Minister Douglas.