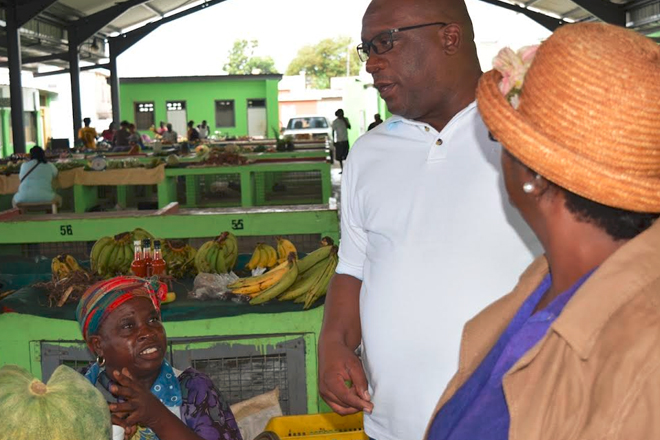 (PRESS SEC) – Prime Minister Dr. the Honourable Timothy Harris has committed that his Team Unity Administration will do “all in its power” to address the deteriorating physical condition of the Basseterre Public Market, as well as other concerns raised by its customers and vendors, in the soonest possible time. Prime Minister Harris made this commitment during his visit there on Saturday, July 30th.

“I engaged the vendors and customers, and listened to their complaints and advice,” Dr. Harris said, noting one concern is that – in the market vendors’ opinion – the street vendors in Basseterre are giving them unfair competition. There is a feeling among the market vendors, therefore, that all of the city’s vendors should be required to operate from the public market on the Bay Road. The Unity Government of St. Kitts and Nevis intends to consult with vendors and the wider public before reaching a decision on this matter.

In relation to people’s concerns about the deteriorating physical condition of the structure that houses the public market, the Honourable Prime Minister said that, “Like them, I share the view that what we need is a public market that adds to the aesthetic and beautification of Basseterre as a modern, thriving city. Certainly, this market holds an important place in the history and economic life of Basseterre and indeed the country. As a Team Unity Government, we hope that before the general elections of 2020 we are able to provide such a gift to all those who use the market.”

Prime Minister Harris said that his Administration also has some ideas “as to how we can add to the services available at the public market.”

Dr. Harris elaborated, saying: “For example, we think that there should be a range of healthy breakfast items, such as fruits and vegetables, as well as an assortment of local and other teas, available for the people who wake up very early to go to the public market. This kind of arrangement, where the variety of needs of consumers and vendors are being catered to, should be an integral part of any future plans for the market. We would want it to be a one-stop shop for local produce, local crafts, local teas and the like, and therefore become a real market and fulfill not only a broad vision, but its potential for what it can do for the people of St. Kitts and Nevis. That is what we hope to deliver.”

The public market has figured prominently in Team Unity’s development agenda, dating back to Saturday, September 28th, 2013, two days after the successful launch of the Team Unity Movement on Thursday, September 26th at Greenlands Park when Dr. Harris was announced as the movement’s leader.

On Saturday, September 28th, 2013, Dr. Harris, Honourable Sam Condor, Honourable Eugene Hamilton, Mr. Jonel Powell and Mr. Lindsay Grant, who is now the Honourable Minister responsible for Tourism et al., led their supporters through the public market and assured farmers and vendors of their commitment to them. This expression of support by Team Unity has borne fruit.

The Team Unity Government recently forgave farmers’ arrears under an initiative spearheaded by Minister of Agriculture, the Honourable Eugene Hamilton. Moreover, farmers in St. Kitts no longer have to pay an annual “Land Rent” fee, which amounted to $300.00 each year per acre of land that they cultivated. Mr. Melvin James, the Director of the Department of Agriculture, speaking in May 2016 on the government’s “Working for You” radio program, said that, “The average farmer has five acres.” Mr. James added that, “There are lots of farmers who have about 20 acres or more, some even 50 acres of land.”

In 2015, the Team Unity Government also introduced a Restaurant Week, which has been credited with providing a stimulus for local farmers, community food vendors, and the economy in general. For instance, the featured ingredient for Restaurant Week 2016 (July 13th to 24th) was pumpkin, which local farmers have been harvesting in large amounts. In fact, Mr. Alphonso Clarke, Communications Officer in the Department of Agriculture, was quoted two months ago in the St. Kitts-Nevis Observer Newspaper, saying: “We have so many pumpkins and sweet potatoes on the island we might soon export them to St. Martin, Anguilla, and the British Virgin Islands. Some of the crops were affected by the drought, but it wasn’t that bad because we still have a large supply.” Mr. Clarke went on to say that one farmer reaped between 4,000 and 5,000 pounds of pumpkins.