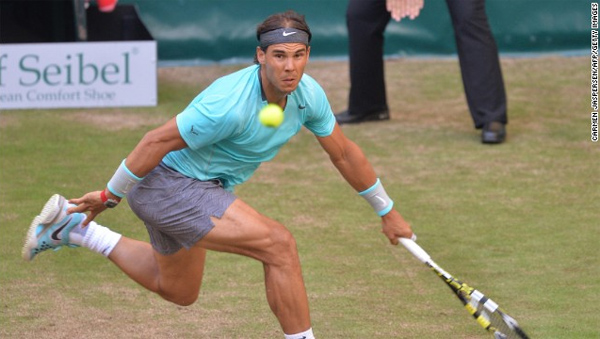 (CNN) — Rafael Nadal, the man who stood on top of the tennis world after winning his ninth French Open title last weekend, was brought back to earth with a bump Thursday.

The world No.1, so dominant on the clay at Roland Garros, was beaten in the first round of the ATP grass-court event in Halle, Germany, by a player ranked 84 places below him.

German Dustin Brown required less than an hour to win 6-4 6-1 on the grass to send Nadal crashing out of the tournament.

The Spaniard, playing his first match on grass since he was stunned in the opening game of last year’s Wimbledon, appeared to struggle with the transition.

At Wimbledon 12 months ago, Nadal was beaten by Czech Lukas Rosol who was ranked 100 at the time in a five-set thriller

And any hopes he would be given the chance to warmup for a return to SW19 were given short shrift by home favorite Brown.

Brown had only ever beaten one top-10 player, John Isner, and this result ranks as his best yet.

Nadal wasn’t the only star to falter Thursday — Andy Murray, who is set to start the defense of his Wimbledon title later this month, was beaten at Queen’s Club in London.

Murray was beaten by veteran Czech Radek Stepanek 7-6 6-2 in his second match since appointing former women’s No. 1 Amelie Mauresmo as his new coach.

“I have only got myself to blame that I lost the first set,” the Scot told the ATP website.

“I don’t know how many set points I had, but quite a lot of them were on my serve.