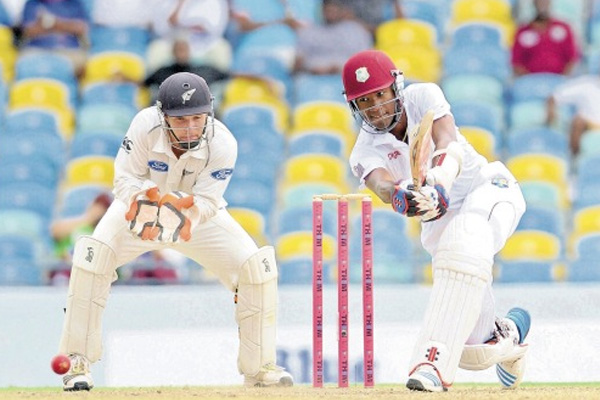 BRIDGETOWN, Barbados (AFP) — Steady rainfall limited play on the second day of the third and final Test between the West Indies and New Zealand to just 33.2 overs, with the home side reaching 169 for two in reply to the tourists’ first innings total of 293 at Kensington Oval yesterday.

West Indies added 137 runs for the loss of openers Chris Gayle and Kraigg Brathwaite in the playing time available under overcast skies.

When the weather closed in after 15 minutes’ play in the post-lunch session, Kirk Edwards (42 not out) and Darren Bravo (8 not out) were seeking to build on the promising position.

More showers are forecast on the scheduled third day today, presenting a challenge to both sides to play the sort of positive, adventurous cricket in the time available over the remaining three days to force a result, with the series now locked at 1-1.

Brathwaite emerged as the unlikely hero of the morning, stroking his way to 68 to follow up his Man-of-the-Match innings of 129 in the second Test in Trinidad the previous week before falling to fast-medium bowler Neil Wagner just before lunch.

He put on 79 for the first wicket with Chris Gayle and continued to score freely in another useful second-wicket stand with Kirk Edwards that produced 74 runs before a mistimed off drive was well held by Tim Southee diving low to his left at cover.

New Zealand’s first wicket of the morning came with the introduction into the attack of off-spinner Mark Craig, who induced the belligerent Gayle into a lofted hit, and Mark Rutherford judged the steepling catch well to send the dangerous left-hander back to the pavilion for 42.

Like Brathwaite, whose innings spanned 116 deliveries and included 10 fours, Edwards continued in the positive vein that brought him 55 in the first innings at Queen’s Park Oval.

He struck Craig for six over long-off to set the tone for his innings, prompting New Zealand captain Brendon McCullum to introduce part-time spinner Kane Williamson, whose bowling action was reported as suspect by the umpires during the second Test.

Williamson almost had immediate success with Edwards surviving a confident appeal for a catch at the wicket.

McCullum appeared to request a television review of the umpire’s “not out” verdict, but immediately cancelled it on consultation with his teammates.