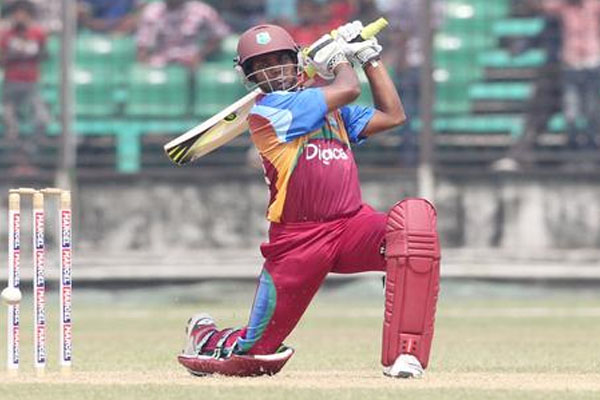 Mumbai, India, CMC — An up tempo, run-a-ball hundred by Denesh Ramdin was not enough to save West Indies from their second straight tour defeat as they went down by 16 runs to India A here Sunday.

Chasing a challenging 282 at the Wankhede Stadium, the Windies could only muster 266 for nine off their 50 overs with Ramdin leading the way with a sparkling 102.

Jason Holder further enhanced his growing reputation as an all-rounder with 54 from 42 deliveries while former Test and one-day skipper Darren Sammy stroked 50 from 67 balls, but the rest or the batting faltered to leave the Windies short of their target.

Seamer Dhawal Kulkarni was outstanding with three for 39 from his ten overs while medium pacer Jasprit Bumrah (2-43) and leg-spinner Karn Sharma (2-70) supported with two wickets apiece.

Opting to bat first earlier, India A chalked up 282 all out off 48.1 overs, with opener Unmukt Chand hitting 101 and Karun Nair striking 64.

West Indies struck early when Holder removed Murali Vijay for 21 to a catch at the wicket, with the score on 26 for one in the eighth over.

Chand then anchored a 149-run second wicket stand with Nair, a partnership that took the advantage away from West Indies.

Once Nair fell in the 28th over, India A lost wickets steadily as Chand remained steady to keep the innings together.

In reply, West Indies crashed to 65 for four in the 16th over as Sharma and the seamers ripped through the visitor’s top order.

Ramdin, however, came to his side’s rescue with a daring knock, slamming ten fours and three fours. He added 101 for the fifth wicket with Sammy who counted six fours and a six.

When Sammy departed, Ramdin added further 62 for the sixth wicket with Holder who hit three fours and two sixes in an entertaining innings.

Ramdin’s dismissal at 228 for six in the 45th over triggered a slide that saw four wickets fall for 38 runs.

The loss was the second for the tourists after going down by nine wickets in the first 50-over contest to India A on Friday.