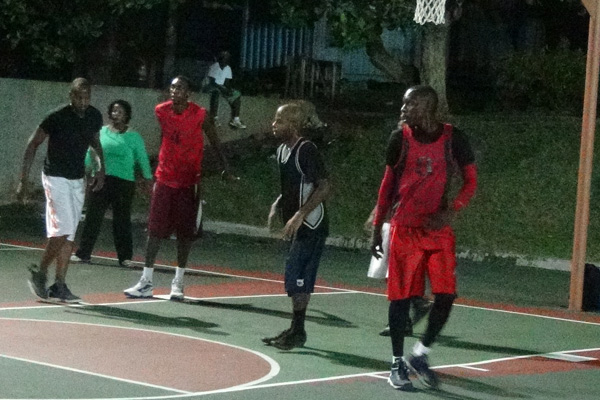 Sports Page—Friday 4th October 2013–The moderate crowd for a week night, was highly entertained as the Dynamics Elite Club’s tournament continued at the Old Manor hard court on Thursday night.

It was a 3×3 Basketball match between Hickman’s and Rawlins BALL A DAY.

The two teams appeared evenly matched throughout and matched each other shot for shot and when they were not scoring, the defensive aspects of the play were tremendous.

At the end of the 20 minutes allotment for the game, the score was tied 16-all.

However, in the overtime play, the Rawlins BALL A DAY scored two more crucial points to win the game with a score line of 18 to 16.

The tournament will continue on Saturday night—5th October with Basketball and Netball games starting at 7.30 pm as follows:

This will be followed by two Basketball games, both involving the Hickman’s team

According to chief organizer Govanie Hendrickson, adjustments are being made to the league to accommodate the Church Ground Basketball league which commences on Saturday evening—5th October.