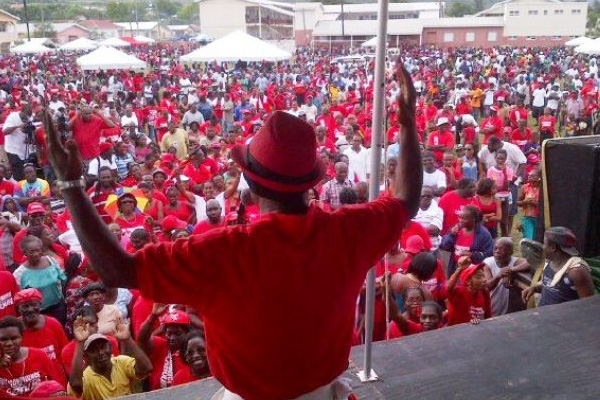 Basseterre, St. Kitts, (CUOPM) — A Red Out Rally and Party and a Church Service are two events announced Thursday to mark the 4thAnniversary of the Fourth Term in office of the governing St. Kitts-Nevis Labour Party.

The Party’s CEO, Ms. Sharylle Richardson said the Red Out Party and Rally begins at 7:30 P.M. with live music by the Nu-Vybes Band and Magic Fingers Ronnie Rascal at Bottom’s Up (formerly Fat Tuesday) on Port Zante.

Fantastic Thunder, Ayatollah and others will also be on stage.

She said during the event, brief addresses will be said by National Political Leader, the Rt. Hon. Dr. Denzil L. Douglas, Ministers of Government and the newly selected candidates including Dr. Vance Gilbert, Dr. Terrence Drew and Mr. Konris Maynard.

“It ends at midnight with Nu-VYbes,” said the Labour Party CEO, who also disclosed that the first 500 persons to attend will get a special prize.

Ms. Richardson also disclosed that the Church Service to mark the milestone will be held on Sunday 26th January at the Rivers of Living Water Christian Centre at Lime Kiln, West Basseterre.

The Service which starts at 9 am includes remarks by Prime Minister Douglas.