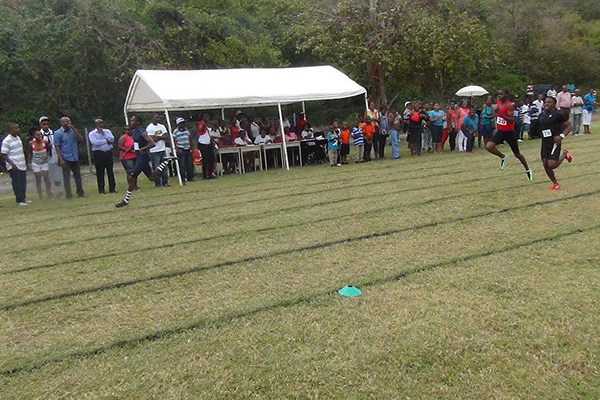 The action was fast and furious, as the athletes of the Gingerland Secondary School faced off at the annual Sports Meet on Tuesday 25th February.

The meet was held at the Gingerland Recreation Grounds under the patronage of past educator, Oliver Beazer.

The meet started with an official march past of the three competing houses—Blue; Green and Red and a moment’s silence was observed in honour of past Headmaster of the school, Mr. Conrad Liburd, who passed away recently.

As the crowd built up during the afternoon, the excitement intensified and so did the cheers.

Star athlete Sadiki Tyson was the ultimate draw, but there were some other stunning performances from some of the other athletes, especially in the junior category.

There was a ding-dong battle between Red and Green all afternoon.  Red got off to an impressive start, leaving the other houses in the dust but then Green house caught up and went past, just after the 800 meters events.

However, the Red house athletes dug deep and eventually took the winner’s trophy, winning by 23 points.

The final placements were: