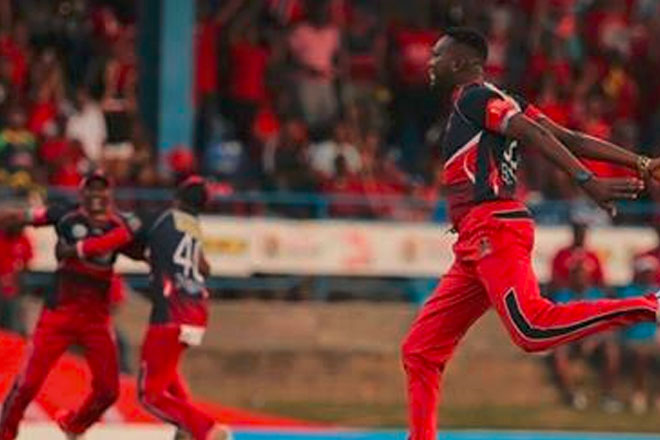 Sports Page — A number of excellent individual performances combined to take the Trinidad & Tobago Red Steel to a thrilling 7-run victory over the Jamaica Tallawahs, who although defeated scored enough runs to ensure qualification for the second phase of the season. The victory also ensures the Red Steel will finish in the top four and ends the hopes of the St. Lucia Zouks.

After posting a strong total of 145-4 from their 20 overs, the Red Steel took wickets at regular intervals to peg the Tallawahs back and despite a late surge led by Andre Russell ended up victorious.

After winning the toss and electing to bat the Red Steel’s innings was expertly anchored by Jacques Kallis who finished with 61 not out. Kallis was supported by a brilliant and powerful cameo from Dwayne Bravo who blitzed 49 from just 30 balls including three sixes. Other than Kallis and Bravo no other Red Steel batsmen hit a single boundary.

All the Tallawahs bowlers recorded economical figures other than Andre Russell who was a tad expensive, conceding 36 from his four overs. He and Jeromy Taylor were the only bowlers to pick up wickets, with Kamran Akmal run out by a superb piece of fielding from Mahela Jayawardene.

The Tallawahs chase began in incredible fashion with Chris Gayle plundering Samuel Badree’s first over for 26, even including a final ball dot ball.

However, although the Tallawahs were ahead of the rate very early the Red Steel bowlers stuck to their task and by taking wickets at regular intervals punctured the run-chase.

At the end of the Powerplay the visitors were just about still in it at 54-3, however the Tallawahs lost 4-33 in the middle-overs as Badree returned brilliantly in his second spell to take 3-9 from his last three overs.

With the Tallawahs 87-7 the match seemed over, and briefly, it seemed like the Tallawahs may not make the 96 they needed to finish in the top four. They did get there, after getting lucky with a dropped catch and then they went on, and on and on. Russell then played a sensational innings of 36 off 22 to suddenly bring the Tallawahs to the brink of victory.

Russell was then dismissed in the penultimate over when he found a fielder on the cover point boundary leaving the Tallawahs with 16 to win off the last over and one wicket in hand. Some excellent bowling from Kevon Cooper restricted the first three balls to just three and even a four off the fourth ball was not enough as the Tallow’s fell seven runs short.