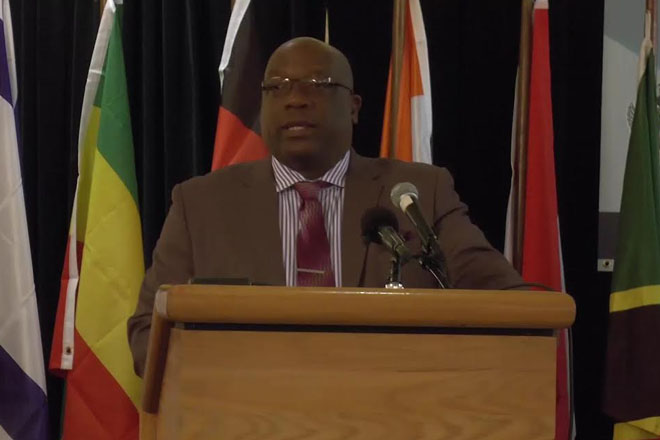 The opening ceremony was held this morning for the reinstated Diplomatic Week. Diplomatic Week is Prime Minister Dr. the Honourable Timothy Harris’ brainchild dating back almost a decade when he served the country well as the Minister of Foreign Affairs between 2001 and 2008.

The inaugural Diplomatic Week was held at the Ocean Terrace Inn under the auspices of the Ministry of Foreign Affairs from February 19th to 22nd, 2007. The theme was “The Role of Foreign Policy and Diplomacy in Advancing the National Development Agenda.” Diplomatic Week was held the next year from February 17th to 21st, 2008 under the theme “Maximizing Benefits from International Relations: Building Partnerships for Mutual Advantage.”

This year is the third instalment of Diplomatic Week and certainly not the last, in the view of Prime Minister Harris’ Team Unity Administration.

The theme of Diplomatic Week 2016 is “Forging New Partnerships and Strengthening Networks for Sustainable Growth and Economic Development.” Prime Minister Harris highlighted the importance of the theme while giving the feature address during the opening ceremony at the St. Kitts Marriott Resort.

“My Cabinet warmly applauds the Minister of Foreign Affairs, the Honourable Mark Brantley and his staff at the Ministry for their steadfast commitment and hard work in resurrecting Diplomatic Week. I encourage them to make Diplomatic Week a permanent fixture of our new architecture for engaging with our diplomats at home and abroad, as well as with those from our partner countries accredited to the Federation of St. Kitts and Nevis,” the Prime Minister said.

Dr. Harris added, “My friends, forging and maintaining diplomatic relations is integral to this Government’s commitment to people-empowerment and to fulfilling our prosperity agenda. Diplomatic Week is a reflection of that intention by building strategic partnerships and strengthening networks critical to ensuring sustainable growth and economic development.”

The one-year-old Team Unity Government’s efforts on this front are being noticed, appreciated and recognized by St. Kitts and Nevis’ diplomatic allies.

On Thursday, March 31st in Barbados, for instance, Prime Minister Dr. the Honourable Timothy Harris and Cabinet Secretary, Mrs. Josephine Huggins held high-level meetings with diplomats from the US, the EU, the UK and Canada, and the St. Kitts and Nevis delegation received feedback such as:

– “We’ve been very pleased with the collaboration.”

– “”From our perspective, you have done a lot.”

– “”We are really encouraged by your efforts to restructure the [Citizenship by Investment] program.”

A testament to the sharpened and renewed governmental focus by St. Kitts and Nevis on forging new partnerships and strengthening networks is the “record number of heads of missions from Africa, Asia, Europe and the Americas” at Diplomatic Week 2016, which was noted by the Minister of Foreign Affairs, the Honourable Mark Brantley during his speech this morning.

Indeed, St. Kitts and Nevis’ resolute commitment to diplomacy and engagement is at the fore this week.

“Diplomatic Week reminds us that on attaining independence and securing membership in the United Nations, we are committed to be a responsible member of the international community,” Prime Minister Harris told the diplomats at the opening ceremony. “We are committed to contribute to a world that is safe, that is secure and prosperous. This week reminds us that we need stronger relations and relationships all over the world to assist us as a small nation to make a difference in the world and to make a difference in our Federation,” the Prime Minister added.