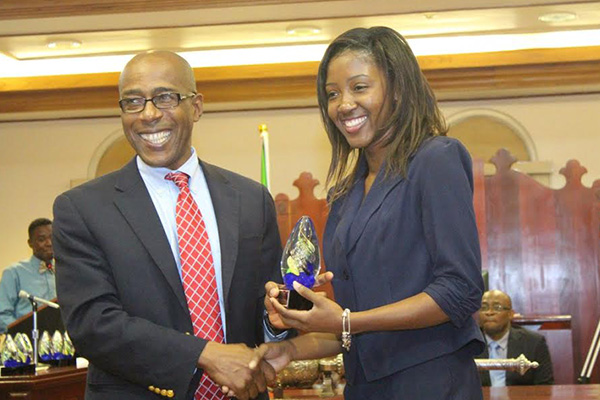 Basseterre, St. Kitts, (SKNIS):  The Glasgow 2014 Queen’s Baton Relay makes its official stop in St. Kitts and Nevis on Thursday (March 27), and one special young person is prepared to fulfill her duty in celebrating this occasion.

Tama Martin, State Scholar and one of the 25 Most Remarkable Teens of 2013, has been chosen to greet the Queen’s Baton Relay officials upon their arrival at the Robert L. Bradshaw International Airport. Information received from the Department of Youth Empowerment indicates that Ms. Martin will also participate at the official cocktail event scheduled for the Ocean Terrace Inn on that same day. On Friday (March 28), Ms. Martin is also expected to sign the booklet and pen her opinion on the “most pressing issue facing the Commonwealth today.” She joins other youth from across 70 nations and territories that will have the distinct honour of sharing her thoughts in the booklet, which will be discussed at 33Fifty.

33Fifity is a leadership programme for Commonwealth leaders between the age of 18 and 25 years. It will run from July 17 to 20 prior to the 2014 Glasgow Games.

Ms. Martin is also expected to actually carry the Queen’s Baton after a ceremony in front of Government Headquarters that will feature remarks by the Right Honourable Dr. Denzil Douglas, Prime Minister of St. Kitts and Nevis.

The State Scholar and Remarkable Teen is reportedly very excited at this opportunity and has embraced the responsibility of being an ambassador for the country.

Tama Martin received the Remarkable Teen award for Performing Arts at a special sitting of the National Assembly on November 27, 2013.