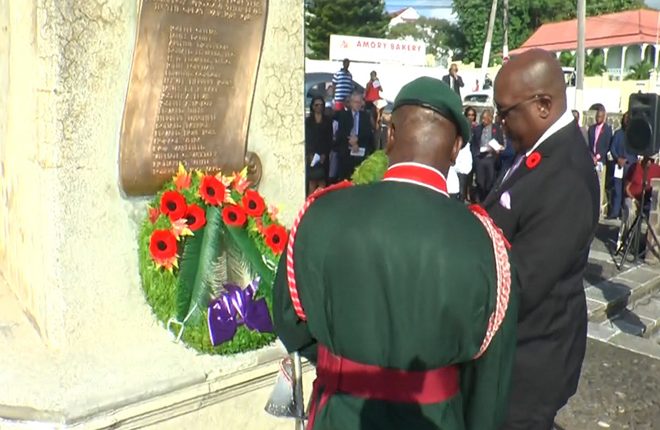 ZIZ News – On Sunday, St. Kitts and Nevis paid tribute to nationals who fought and died in World Wars One and Two.

The National Day of Remembrance was observed with a wreath laying ceremony at the War Memorial or Cenotaph on the Bay Road.

The ceremony began with the arrival of the Commissioner of Police and the Commander of St. Kitts Nevis Defence Force followed by Prime Minister Dr. The Hon Timothy Harris and the Governor General’s Deputy, His Excellency Michael Morton CBE JP.

This was followed by a gun volley to mark two minutes of silence.

Delivering the Call to Worship, Wycliffe Morton of the Moravian Church said the sacrifices of the fallen will be remembered forever.

Among those laying wreaths were Governor General’s Deputy, Prime Minister Dr. The Hon. Timothy Harris, representatives of various uniformed bodies and members of the diplomatic corps.