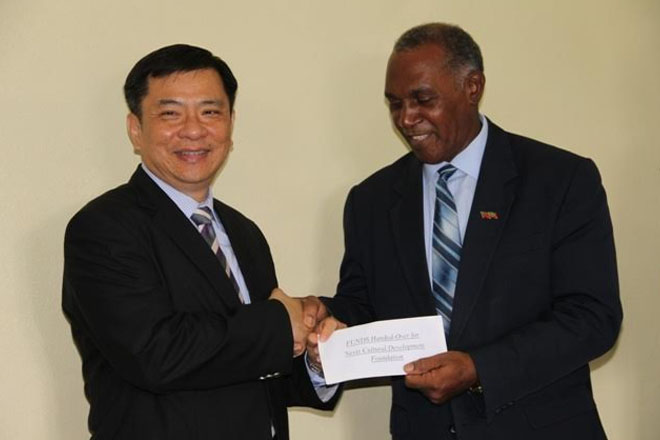 NIA — Republic of China (Taiwan) Ambassador to St. Kitts and Nevis His Excellency George Gow Wei Chiou presented a US$50,000 cheque to Premier of Nevis Hon. Vance Amory on April 19, 2016, at his Bath Hotel office in Bath Plain. The money will be used for equipment and training at the Nevis Cultural Development Foundation (NCDF).

In brief remarks, the Ambassador underscored the importance of culture to a people and described it as their treasure.

He noted that during the 33-year-old diplomatic relationship between St. Kitts and Nevis and Taiwan many collaborative projects were undertaken in the areas of agriculture, tourism, health but none is more important than the preservation and promotion of culture.

The ambassador said he was honoured to make the presentation to the Nevis Island Administration on behalf of his government and people added that the project would strive to preserve the soul of the Nevisian people.

In response, Mr. Amory thanked the ambassador for what he described as a generous contribution and assured that it would be used in the preservation and development of cultural activity on the island.

He said Nevis is culturally rich and its history and heritage continue to be demonstrated over the years in dance, music and performing arts which make the island unique.

Mr. Amory used the opportunity to tell the ambassador the friendship between both islands would continue and strengthen.

Meantime, Deputy Premier and Minister of Culture Hon. Mark Brantley, moments after he received the cheque from Mr. Amory also expressed gratitude for the gift from the ambassador and described the gift as a tangible contribution to culture and a tangible demonstration of the ongoing friendship to the people of St. Kitts and Nevis.

He thanked the ambassador and his government for their quick and favourable response to the request.

Mr. Brantley also took the opportunity to thank the Chief Executive Officer (CEO) of the NCDF Keith. He said the donation would not be possible if the CEO did not take the initiative to seek assistance.

Also present at the ceremony were Cabinet Secretary Stedmond Tross, Junior Minister in the Nevis Island Administration Hon. Troy Liburd and Counselor at the Embassy of the Republic of China (Taiwan) David Y.T. Yu.