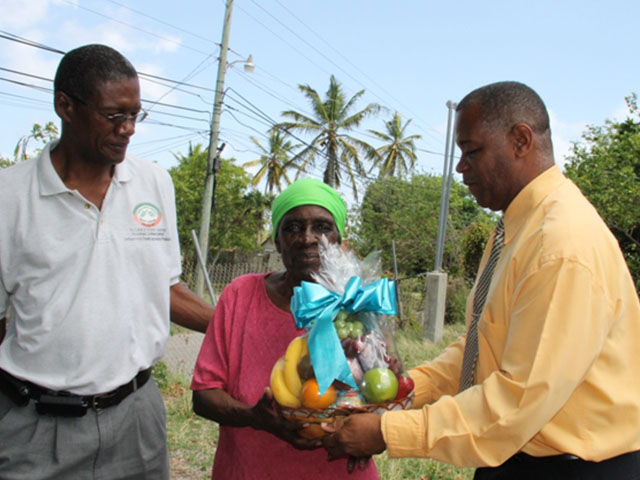 NIA CHARLESTOWN NEVIS  — Five retires from the Department of Agriculture on Nevis were given tokens of appreciation in recognition of their contribution to the development of Agriculture. Claudina Claxton and Euclid “Judge” Saddler of Brown Hill, Ashley “Ginnel” Webbe of Middle Works in Hanley’s Road, Rodrick Griffin of Butlers and Federica France of Camps  were all presented with fruit baskets at their homes on May 21, 2014.

The presentations were made by Permanent Secretary in the Ministry of Agriculture Eric Evelyn and Director in the Department of Agriculture Keithley Amory, who stood in for Minister of Agriculture Hon. Alexis Jeffers, as part of the observance of Agriculture Awareness Month throughout May.

“We are, this month, celebrating Agriculture Awareness Month and one of the activities that we had planned for the month observance is to make presentations to some of our retirees. That’s persons who worked in the field, worked extremely hard and who would have retired from the Department of Agriculture.

In response, Claxton who had retired in 2005 after more 30 years as a field worker at the Prospect Agriculture Station said “Thank you very much and I had a good time working at Prospect and I was very truthful and I was faithful and I was trusted.”

Meantime, a visibly emotional Euclid Saddler in response to the gesture could only muster “Thank you very much Mr. Evelyn and Mr. Amory.”

He gave 21 years of service to the Department of Agriculture as a butcher at the Abattoir and retired in 2012.

Rodrick Griffin gave nine years of service to the Department. He worked at the government-owned Maddens Farm with the animals as an Overseer and gave a hearty “Thank you” when he was presented with the fruit basket.

Federica France worked with the Department of Agriculture at the Prospect Estate and several other government-owned estates as a field worker in the production of a number of crops including cotton production till she fell ill some years ago, became incapacitated and was no longer able to work.