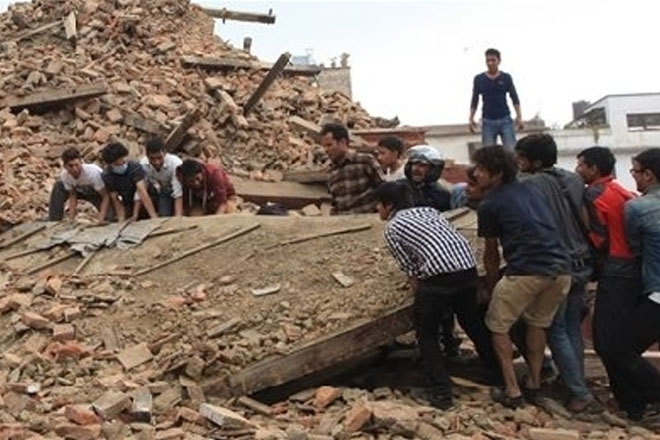 Kathmandu, Nepal (AFP) — Desperate Nepalis clashed with riot police and seized supplies of bottled water in the capital Wednesday as anger boiled over among survivors of an earthquake that killed more than 5,000 people.

Supplies are running thin and aftershocks have strained nerves in ruined Kathmandu, home to some 2.5 million before it was shattered by Saturday’s 7.8 magnitude quake.

Desperate to leave, thousands of people began gathering from before dawn outside the main bus station after the government promised to lay on special services to far-flung rural areas.

But when the buses failed to materialise, anger began surging and scuffles broke out between the crowds and riot police who were sent in to try to contain the situation near parliament.

Some protesters forced a truck carrying drinking water off the road and climbed on top of it, throwing the bottles to the crowd.

“We’ve been left starving in the cold and the best this government can give us is this queue. Why are they so slow?” demanded Rajana as she lined up along with thousands of others for a bus to her home village.

“I keep hearing on the news that all governments and aid agencies are here, but where are they? Our government is totally absent. Forget shelter, they couldn’t even give us water,” said Rajana, who goes by one name.

Columns of riot police stood behind rolls of barbed wire as rioters armed with sticks surged into the street, attacking buses and other vehicles.

At one point a young woman was pulled from her scooter and assaulted by an angry protester. Onlookers screamed at him to stop before riot police pulled him away.

Israel advised its nationals to leave Nepal for “health and security reasons”.

Hundreds of thousands of people were still sleeping outside in the streets under tents. Their homes had either been wrecked or were feared to be on the verge of collapse.

But with the number and scale of the aftershocks subsiding, some residents were returning to salvage possessions from the ruins of their homes, grabbing everything from fridges to family chickens.

The government acknowledged it had been overwhelmed by the devastation from the deadliest quake in Nepal in over 80 years.

“There have been some weaknesses in managing the relief operation,” Communications Minister Minendra Rijal told Nepal’s Kantipur Television.

“The disaster has been so huge and unprecedented that we have not been in a position to meet the expectations of the needy people. But we are ready to accept our weakness, learn and move ahead in the best way possible.”

There was also desperation in devastated rural areas. People have been pleading to be airlifted out when the occasional helicopter has reached their villages with relief supplies.

“Over 200,000 people are homeless. We’ve been told that materials are on their way, but we haven’t received them yet,” the official pleaded.

A total of 5,057 people are so far known to have died in Nepal and around 100 more in neighbouring India and China.

Around 8,000 were injured while the United Nations estimates that eight million people have been affected.

Among the dead were 18 climbers who were at Mount Everest base camp when an avalanche from the quake flattened everything in its path. The victims included two Americans, an Australian and a Chinese national.

With rescue teams from many countries on the ground, a top UN official said the Nepalese government had told organisers of the relief effort there was no need for further outside help.

“They feel they have enough capacity to deal with the immediate needs in search and rescue,” Jamie McGoldrick, the resident coordinator for Nepal, told AFP.

“Those that are already en route can come but the others are being told not to.”

French rescuers managed to pluck one man from the rubble of his Kathmandu hotel late Tuesday after he was trapped under masonry for around 82 hours.

Barely conscious and covered in dust, Rishi Khanal was taken to hospital after being fitted with a neck brace and a drip attached to his right arm.

“He said he was so thirsty that he even drank his own urine,” his brother-in-law Purna Ram Bhattarai told AFP.

Rescuers underlined the daunting scale of the task.

“It’s a very difficult disaster zone, very compact and on top of that it’s been raining,” Pascal Montant, part of the French rescue team, told AFP after one fruitless search.

An army helicopter reached the scene of an avalanche in the Ghoratabela district on Tuesday afternoon in a region that is popular with foreign trekkers.

The scale of casualties was unknown but 18 survivors had been rescued and there were believed to be 200-250 people in the area, said Gautam Rimal, a senior local official.

The quake is a serious blow to the economy of the impoverished nation, already reeling from a decade-long civil war that ended in 2006, with one estimate putting the cost of reconstruction at $5 billion.